Anti-ISIL strategy to include civilian and military agencies 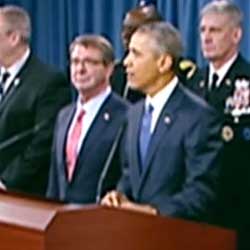 Yesterday, President Obama met with military and civilian leaders to discuss the strategy to degrade and ultimately destroy the Islamic State of Iraq and the Levant (ISIL). The strategy includes multiple elements of American power, including military, intelligence, diplomacy, and economic development.

The President acknowledged that countering ISIL will be a long campaign, and noted that in many areas ISIL is “dug in among innocent civilian populations,” and that “It will take time to root them out.”

The American strategy against ISIL will require coordination among multiple U.S. government departments and agencies, as well as international partnerships. According to the President, “Partnering with other countries, sharing more information, strengthening laws and border security allows us to work to stem the flow of foreign fighters to Syria as well as Iraq… And working together, all nations are going to need to do more. But we’re starting to see some progress.”

On July 6, President Obama provided an update on the U.S. campaign to
degrade and destroy the Islamic State of Iraq and the Levant (ISIL).

For more information about the anti-ISIL strategy, please follow the links below.
Obama Discusses Anti-ISIL Strategy With National Security Team at Pentagon, DoD News
The President Provides an Update on Our Campaign to Degrade and Destroy ISIL, White House