‘Armageddon, Arabia, and the Modern Middle East’ presented May 9 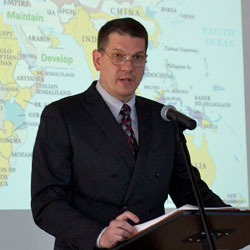 Steed’s lecture was the 15th in the General of the Armies John J. Pershing Great War Centennial Series hosted by the CGSC Department of Military History and supported by the CGSC Foundation.

Steed began his lecture covering the background of events leading up to World War I between the allies, the Germans and the Ottoman Empire. In the main focus of his lecture Steed recounted how on Dec. 11, 1917, British General Edmund Allenby entered the city of Jerusalem on foot, the first conquering British official to do so since the crusading period. On Sept. 19, 1918, General Allenby ordered another major offensive, labeled by many the Battle of Megiddo, and by some, Armageddon. This battle featured the fastest mounted offensive in human history until Operation Desert Storm 72 years later.

On Allenby’s eastern flank was a non-traditional Arab army conducting raids and attacks in the name of the Great Arab Revolt. Steed used short clips from the 1962 film Lawrence of Arabia since most know of this action through that film.

At the end of his presentation, Steed proposed that the deals and destruction orbiting these successful offensive efforts – allied and Arab – provide the foundation for all of the challenges we now see in the Middle East.

Steed also spent some time discussing the various treaties related to the conditions and outcome of WWI with special note of the “Sykes-Picot” treaty, which was a secret agreement in 1916 between Britain and France on how the soon-to-be-conquered Ottoman Empire was to be divided between British and French spheres of influence. The borders of the middle eastern countries we know today were established through this agreement and a century later, many Arabs and others blame violence in the region on the Sykes-Picot treaty.

Brian L. Steed is a senior fellow with Narrative Strategies. He is a retired U.S. Army lieutenant colonel, former member of the Department of Military History at the U.S. Army Command and General Staff College, and a former Middle East Foreign Area Officer. He served eight and a half consecutive years in the Middle East including an assignment as an officer in the Jordanian Armed Forces – the very force drawing its lineage from the great Arab Revolt he discussed in this lecture.

Steed has written numerous books on military theory and military history and cultural awareness. His most recent published books include ISIS: An Introduction and Guide to the Islamic State, Voices of the Iraq War: Contemporary Accounts of Daily Life (Voices of an Era), and Bees and Spiders: Applied Cultural Awareness and the Art of Cross-Cultural Influence.

Since returning from Iraq in March 2015 Steed has been speaking on understanding ISIS in their cultural and historical context. He is currently a Ph.D. student at the University of Missouri-Kansas City where he is working on a dissertation focused on the role of narrative and modern conflict.

The CGSC Foundation has received support for all Pershing lectures in academic year 2018 from First Command Financial Services in Leavenworth, Kansas, as well as the national headquarters of the Veterans of Foreign Wars (VFW) in Kansas City, Missouri.

All lectures in the series are free and open to the public. For more information on the content of lectures in the series contact Dr. Tom Hanson, CGSC’s director of the Department of Military History: email– thomas.e.hanson.civ@mail.mil or phone– 913-684-2056. For other questions, contact Rod Cox, email– rcox@thesimonscenter.org, or Ann Soby, email– ann@cgscf.org, at the CGSC Foundation or phone 913-651-0624.

The next lecture in the series will be in fall 2018 with a specific date TBD.