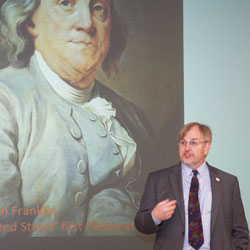 Mr. Andrew B. Mitchell, a career Foreign Service Officer, led the discussion in the InterAgency Brown-Bag Lecture conducted Nov. 14, in the Arnold Conference Room of the Lewis and Clark Center on Fort Leavenworth. Mitchell provided attendees with an overview of the U.S. Department of State mission, it’s history and how it is currently organized. He also discussed how State operates as an important element of the U.S. national security team, as well as how it conducts foreign policy as the face of our nation around the world. 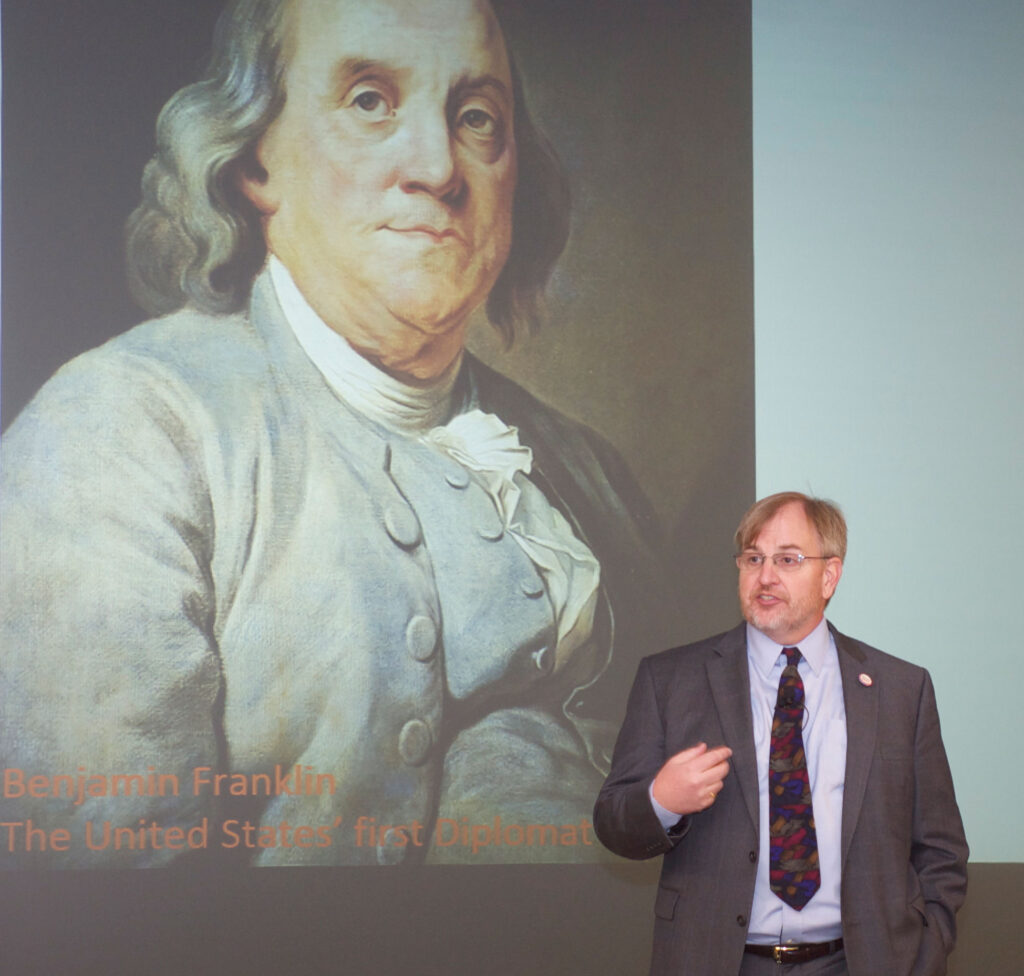 Mitchell is the Distinguished Professor of Diplomacy at the U.S. Army Command and General Staff College and Army University. His career in diplomacy has spanned over 20 years with service primarily in the Middle East and North Africa. His postings include service in Jordan, Algeria, Saudi Arabia, Tunisia, Yemen, and Egypt. A career public affairs officer, Mitchell has also served in political, economic, and consular positions, including service as the Chief of the Combined Political/Economic section in Sana’a, Yemen from 2007-2009. Prior to entering the Foreign Service, Mitchell worked as an engineer in microcircuit fabrication with a specialization in plasma vapor deposition of metals and ion implantation. He holds a Bachelor of Science from Loyola College in Maryland and a Master of Arts in National Security and Strategic Studies from the United States Naval War College.

The InterAgency Brown-Bag Lecture Series, co-hosted by the CGSC Foundation’s Simons Center with the U.S. Army Command and General Staff School (CGSS), was initiated in September 2016 and is an extracurricular, interagency topic-focused series that is designed to enhance and enrich the CGSS curriculum. The presentations are scheduled each month. – The next lecture is Dec. 12 and will feature a presentation from Larry Hisle from the Federal Executive Board in Kansas City.

All lectures in the InterAgency Brown-Bag Lecture Series are free and open to the public. As the series moniker states, the lecture series is conducted in the traditional “brown-bag lunch” format. – Attendees are welcome to bring their own lunches into the conference room. Members of the public coming to the lectures from off-post will need to add extra time to check-in at the Fort Leavenworth visitor center. – For visitor information, see https://garrison.leavenworth.army.mil/index.php/my-fort/all-services/gate-information.

The CGSC Foundation and the Simons Center have received support for all brown-bag lectures in academic year 2018 from First Command Financial Services in Leavenworth, Kansas.

For more photos from the lecture visit the album on the CGSC Foundation Flickr site.