Last month the Federal Bureau of Investigation (FBI) released a study on the pre-attack behaviors of active shooters. The new report is Phase II of a previous study on active shooters that was published in 2014 and examined 160 active shooter incidents that took place in the United States between 2000 and 2013.

Whereas Phase I of the study focused on  on the circumstances of the active shooting events (e.g., location, duration, and resolution), Phase II of the study assesses the pre-attack behaviors of the shooters, seeking to determine how active shooters behave prior to an attack and what motivated the attack. 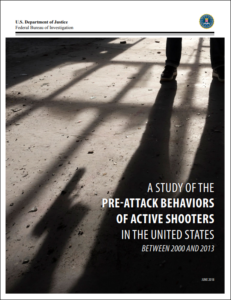