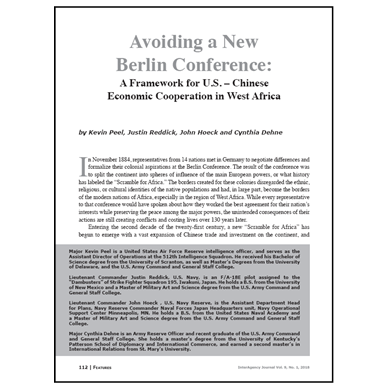 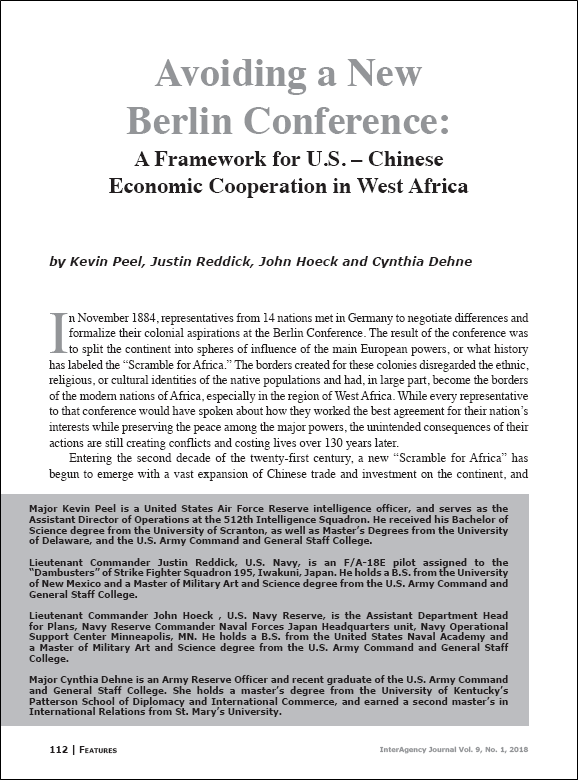 In November 1884, representatives from 14 nations met in Germany to negotiate differences and formalize their colonial aspirations at the Berlin Conference. The result of the conference was to split the continent into spheres of influence of the main European powers, or what history has labeled the “Scramble for Africa.” The borders created for these colonies disregarded the ethnic, religious, or cultural identities of the native populations and had, in large part, become the borders of the modern nations of Africa, especially in the region of West Africa. While every representative to that conference would have spoken about how they worked the best agreement for their nation’s interests while preserving the peace among the major powers, the unintended consequences of their actions are still creating conflicts and costing lives over 130 years later.

Entering the second decade of the twenty-first century, a new “Scramble for Africa” has begun to emerge with a vast expansion of Chinese trade and investment on the continent, and the U.S. government looking to readdress its interests as it begins to fall behind. China’s long-term presence posture has allowed Beijing to forge strong diplomatic relations with African governments and earn high favorability ratings among its populations, as it has grown into the continent’s largest trading partner. However, there is growing concern among both foreign and West African observers that China’s continued investment in the region is contingent on its ability to access natural resources, rather than on its intent to improve living conditions or economic growth…