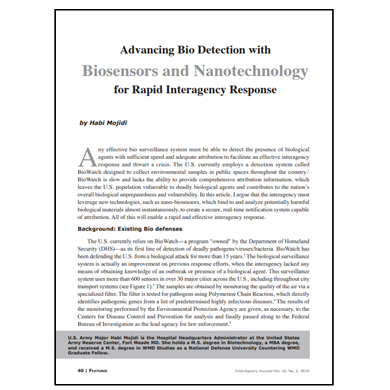 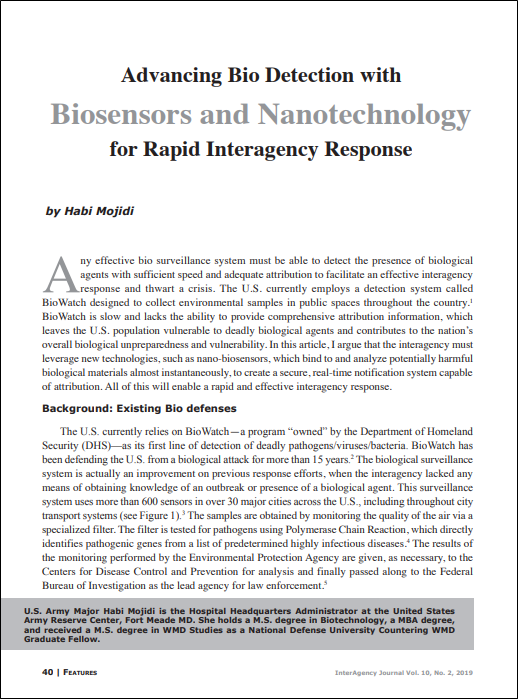 Any effective bio surveillance system must be able to detect the presence of biological agents with sufficient speed and adequate attribution to facilitate an effective interagency response and thwart a crisis. The U.S. currently employs a detection system called BioWatch designed to collect environmental samples in public spaces throughout the country. BioWatch is slow and lacks the ability to provide comprehensive attribution information, which leaves the U.S. population vulnerable to deadly biological agents and contributes to the nation’s overall biological unpreparedness and vulnerability. In this article, I argue that the interagency must leverage new technologies, such as nano-biosensors, which bind to and analyze potentially harmful biological materials almost instantaneously, to create a secure, real-time notification system capable of attribution. All of this will enable a rapid and effective interagency response.

The U.S. currently relies on BioWatch—a program “owned” by the Department of Homeland Security (DHS)—as its first line of detection of deadly pathogens/viruses/bacteria. BioWatch has been defending the U.S. from a biological attack for more than 15 years. The biological surveillance system is actually an improvement on previous response efforts, when the interagency lacked any means of obtaining knowledge of an outbreak or presence of a biological agent. This surveillance system uses more than 600 sensors in over 30 major cities across the U.S., including throughout city transport systems…