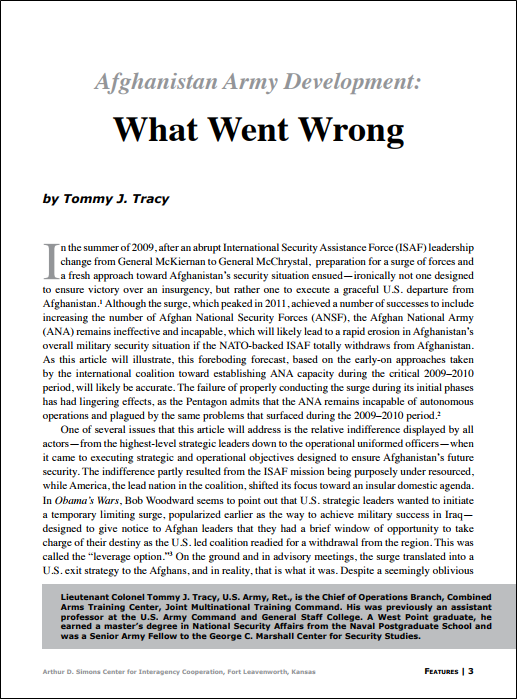 In the summer of 2009, after an abrupt International Security Assistance Force (ISAF) leadership change from General McKiernan to General McChrystal, preparation for a surge of forces and a fresh approach toward Afghanistan’s security situation ensued—ironically not one designed to ensure victory over an insurgency, but rather one to execute a graceful U.S. departure from Afghanistan. Although the surge, which peaked in 2011, achieved a number of successes to include increasing the number of Afghan National Security Forces (ANSF), the Afghan National Army (ANA) remains ineffective and incapable, which will likely lead to a rapid erosion in Afghanistan’s overall military security situation if the NATO-backed ISAF totally withdraws from Afghanistan. As this article will illustrate, this foreboding forecast, based on the early-on approaches taken by the international coalition toward establishing ANA capacity during the critical 2009–2010 period, will likely be accurate. The failure of properly conducting the surge during its initial phases has had lingering effects, as the Pentagon admits that the ANA remains incapable of autonomous operations and plagued by the same problems that surfaced during the 2009–2010 period.

One of several issues that this article will address is the relative indifference displayed by all actors—from the highest-level strategic leaders down to the operational uniformed officers—when it came to executing strategic and operational objectives designed to ensure Afghanistan’s future security. The indifference partly resulted from the ISAF mission being purposely under resourced…