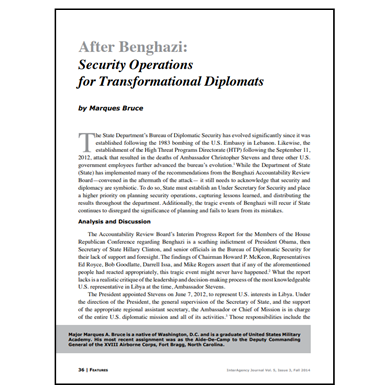 After Benghazi: Security Operations for Transformational Diplomats
by Marques A. Bruce 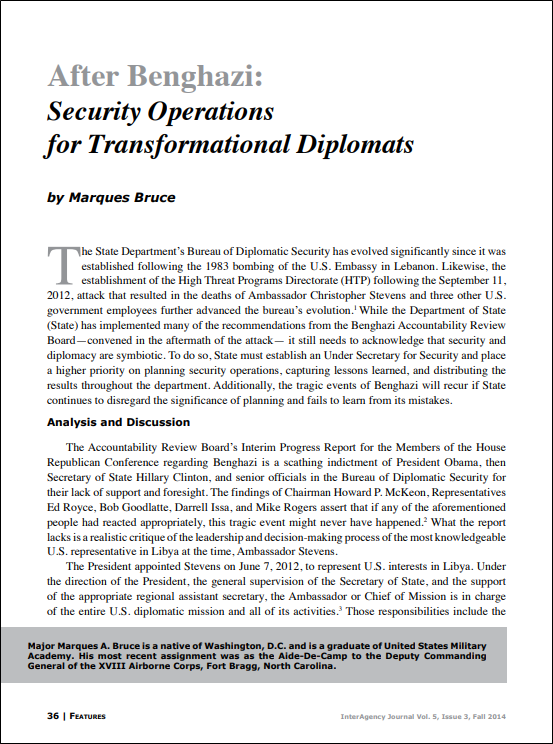 The State Department’s Bureau of Diplomatic Security has evolved significantly since it was established following the 1983 bombing of the U.S. Embassy in Lebanon. Likewise, the establishment of the High Threat Programs Directorate (HTP) following the September 11, 2012, attack that resulted in the deaths of Ambassador Christopher Stevens and three other U.S. government employees further advanced the bureau’s evolution. While the Department of State (State) has implemented many of the recommendations from the Benghazi Accountability Review Board—convened in the aftermath of the attack— it still needs to acknowledge that security and diplomacy are symbiotic. To do so, State must establish an Under Secretary for Security and place a higher priority on planning security operations, capturing lessons learned, and distributing the results throughout the department. Additionally, the tragic events of Benghazi will recur if State continues to disregard the significance of planning and fails to learn from its mistakes.

The Accountability Review Board’s Interim Progress Report for the Members of the House Republican Conference regarding Benghazi is a scathing indictment of President Obama, then Secretary of State Hillary Clinton, and senior officials in the Bureau of Diplomatic Security for their lack of support and foresight. The findings of Chairman Howard P. McKeon, Representatives Ed Royce, Bob Goodlatte, Darrell Issa, and Mike Rogers assert that if any of the aforementioned people had reacted appropriately, this tragic event might never have happened. What the report lacks is a realistic critique of the leadership and decision-making process of the most knowledgeable U.S. representative in Libya at the time, Ambassador Stevens…