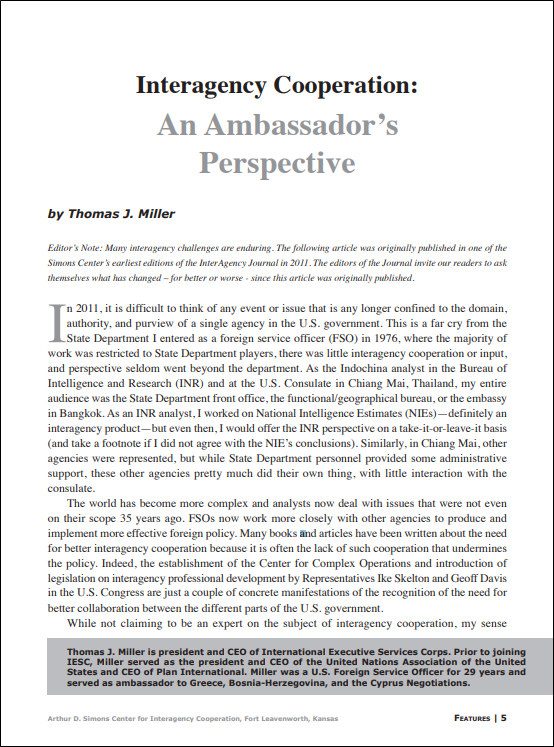 In 2011, it is difficult to think of any event or issue that is any longer confined to the domain, authority, and purview of a single agency in the U.S. government. This is a far cry from the State Department I entered as a foreign service officer (FSO) in 1976, where the majority of work was restricted to State Department players, there was little interagency cooperation or input, and perspective seldom went beyond the department. As the Indochina analyst in the Bureau of Intelligence and Research (INR) and at the U.S. Consulate in Chiang Mai, Thailand, my entire audience was the State Department front office, the functional/geographical bureau, or the embassy in Bangkok. As an INR analyst, I worked on National Intelligence Estimates (NIEs)—definitely an interagency product—but even then, I would offer the INR perspective on a take-it-or-leave-it basis (and take a footnote if I did not agree with the NIE’s conclusions). Similarly, in Chiang Mai, other agencies were represented, but while State Department personnel provided some administrative support, these other agencies pretty much did their own thing, with little interaction with the consulate.

The world has become more complex and analysts now deal with issues that were not even on their scope 35 years ago. FSOs now work more closely with other agencies to produce and implement more effective foreign policy. Many books and articles have been written about the need for better interagency cooperation because it is often the lack of such cooperation that undermines the policy…