Featured Article: Application of the Ethical Triangle in the 2014 Ebola Epidemic… 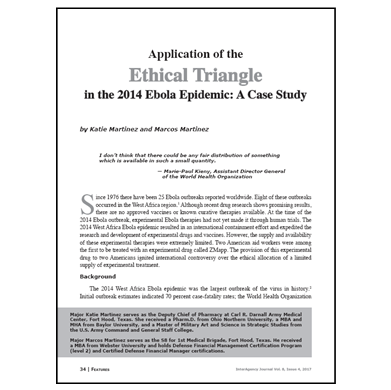 Application of the Ethical Triangle in the 2014 Ebola Epidemic: A Case Study
by Katie Martinez and Marcos Martinez 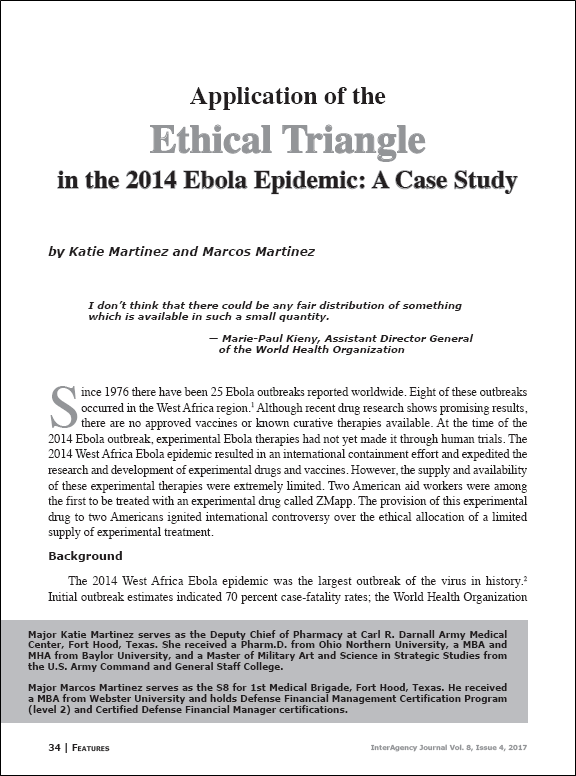 Since 1976 there have been 25 Ebola outbreaks reported worldwide. Eight of these outbreaks occurred in the West Africa region. Although recent drug research shows promising results, there are no approved vaccines or known curative therapies available. At the time of the 2014 Ebola outbreak, experimental Ebola therapies had not yet made it through human trials. The 2014 West Africa Ebola epidemic resulted in an international containment effort and expedited the research and development of experimental drugs and vaccines. However, the supply and availability of these experimental therapies were extremely limited. Two American aid workers were among the first to be treated with an experimental drug called ZMapp. The provision of this experimental drug to two Americans ignited international controversy over the ethical allocation of a limited supply of experimental treatment.

The 2014 West Africa Ebola epidemic was the largest outbreak of the virus in history. Initial outbreak estimates indicated 70 percent case-fatality rates; the World Health Organization (WHO) declared a “public health emergency of international concern.” The Centers for Disease Control and Prevention (CDC) estimates more than 11,000 individuals died in West Africa during the 2014 Ebola crisis.

Application of the Ethical Triangle in the 2014 Ebola Epidemic: A Case Study PDF