Featured Article: The Army Interagency Experience at the Department of Commerce 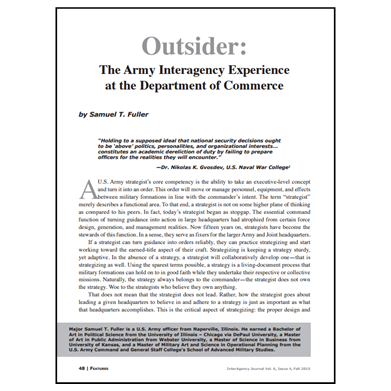 Outsider: The Army Interagency Experience at the Department of Commerce
by Samuel T. Fuller 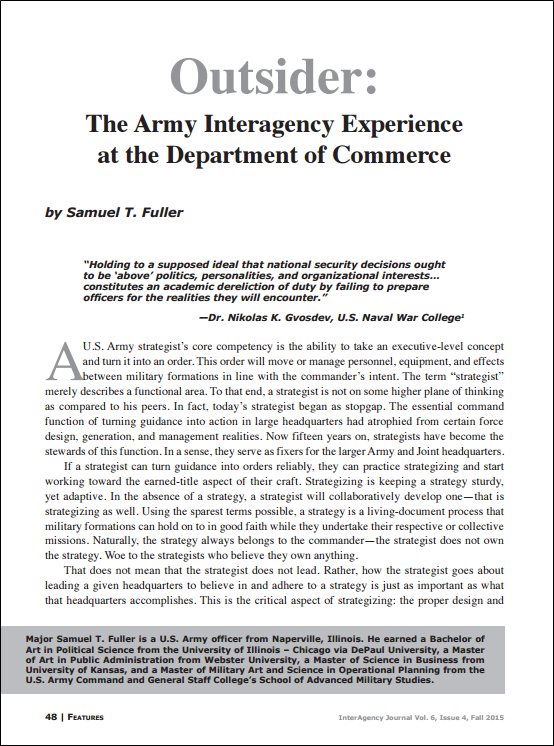 A U.S. Army strategist’s core competency is the ability to take an executive-level concept
and turn it into an order. This order will move or manage personnel, equipment, and effects between military formations in line with the commander’s intent. The term “strategist” merely describes a functional area. To that end, a strategist is not on some higher plane of thinking as compared to his peers. In fact, today’s strategist began as stopgap. The essential command function of turning guidance into action in large headquarters had atrophied from certain force design, generation, and management realities. Now fifteen years on, strategists have become the stewards of this function. In a sense, they serve as fixers for the larger Army and Joint headquarters.

If a strategist can turn guidance into orders reliably, they can practice strategizing and start working toward the earned-title aspect of their craft. Strategizing is keeping a strategy sturdy, yet adaptive. In the absence of a strategy, a strategist will collaboratively develop one—that is strategizing as well. Using the sparest terms possible, a strategy is a living-document process that military formations can hold on to in good faith while they undertake their respective or collective missions. Naturally, the strategy always belongs to the commander—the strategist does not own the strategy. Woe to the strategists who believe they own anything.

Outsider: The Army Interagency Experience at the Department of Commerce PDF