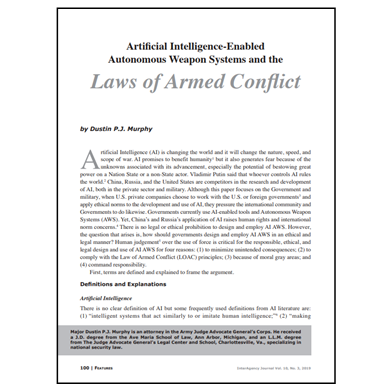 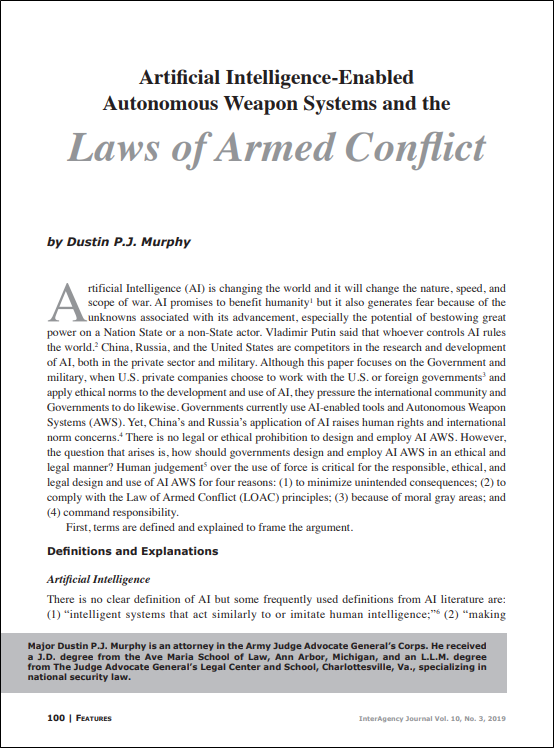 Artificial Intelligence (AI) is changing the world and it will change the nature, speed, and
scope of war. AI promises to benefit humanity but it also generates fear because of the
unknowns associated with its advancement, especially the potential of bestowing great
power on a Nation State or a non-State actor. Vladimir Putin said that whoever controls AI rules the world. China, Russia, and the United States are competitors in the research and development of AI, both in the private sector and military. Although this paper focuses on the Government and military, when U.S. private companies choose to work with the U.S. or foreign governments and apply ethical norms to the development and use of AI, they pressure the international community and Governments to do likewise. Governments currently use AI-enabled tools and Autonomous Weapon Systems (AWS). Yet, China’s and Russia’s application of AI raises human rights and international norm concerns. There is no legal or ethical prohibition to design and employ AI AWS. However,
the question that arises is, how should governments design and employ AI AWS in an ethical and legal manner? Human judgement over the use of force is critical for the responsible, ethical, and legal design and use of AI AWS for four reasons: (1) to minimize unintended consequences; (2) to comply with the Law of Armed Conflict (LOAC) principles; (3) because of moral gray areas; and (4) command responsibility.

First, terms are defined and explained to frame the argument. There is no clear definition of AI but some frequently used definitions from AI literature are: (1) “intelligent systems that act similarly to or imitate human intelligence;” (2) “making machines behave in ways that are called intelligent” as if humans were behaving; and (3) “AI is a computational system designed to automate decisions, with the appearance of intelligence…”