Featured Article: When Asimov’s Robots Encounter the Laws of War 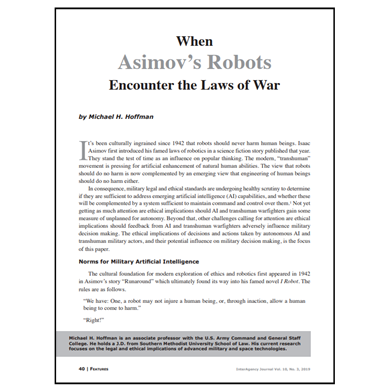 When Asimov’s Robots Encounter the Laws of War
by Michael H. Hoffman 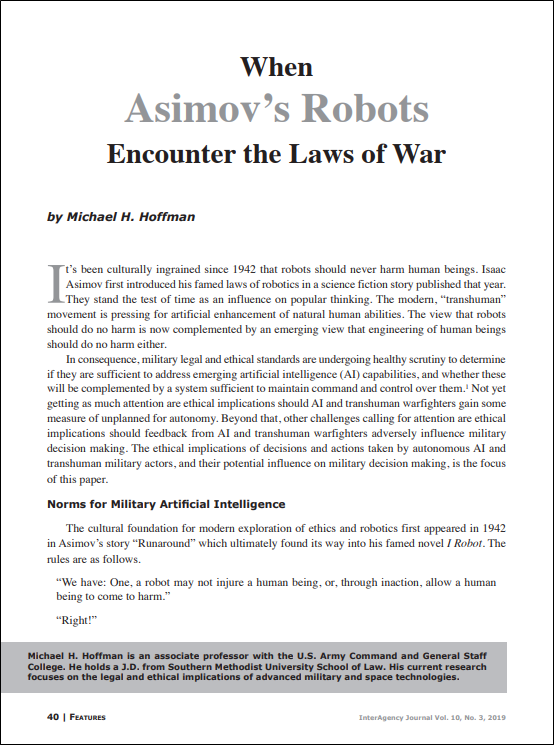 I t’s been culturally ingrained since 1942 that robots should never harm human beings. Isaac Asimov first introduced his famed laws of robotics in a science fiction story published that year. They stand the test of time as an influence on popular thinking. The modern, “transhuman” movement is pressing for artificial enhancement of natural human abilities. The view that robots should do no harm is now complemented by an emerging view that engineering of human beings should do no harm either.

In consequence, military legal and ethical standards are undergoing healthy scrutiny to determine if they are sufficient to address emerging artificial intelligence (AI) capabilities, and whether these will be complemented by a system sufficient to maintain command and control over them. Not yet getting as much attention are ethical implications should AI and transhuman warfighters gain some measure of unplanned for autonomy. Beyond that, other challenges calling for attention are ethical implications should feedback from AI and transhuman warfighters adversely influence military decision making. The ethical implications of decisions and actions taken by autonomous AI and transhuman military actors, and their potential influence on military decision making, is the focus of this paper.

When Asimov’s Robots Encounter the Laws of War PDF