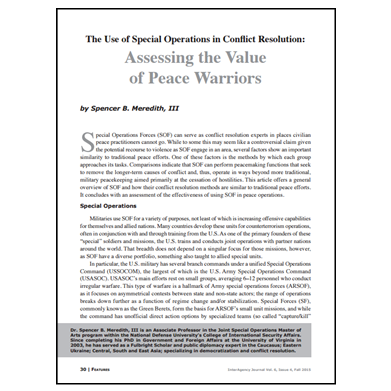 The Use of Special Operations in Conflict Resolution: Assessing the Value of Peace Warriors
by Spencer B. Meredith, III 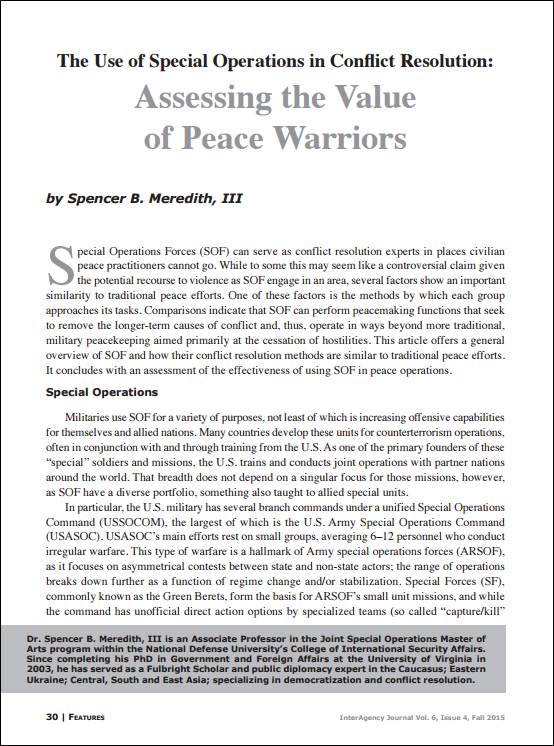 Special Operations Forces (SOF) can serve as conflict resolution experts in places civilian peace practitioners cannot go. While to some this may seem like a controversial claim given the potential recourse to violence as SOF engage in an area, several factors show an important similarity to traditional peace efforts. One of these factors is the methods by which each group approaches its tasks. Comparisons indicate that SOF can perform peacemaking functions that seek to remove the longer-term causes of conflict and, thus, operate in ways beyond more traditional, military peacekeeping aimed primarily at the cessation of hostilities. This article offers a general overview of SOF and how their conflict resolution methods are similar to traditional peace efforts. It concludes with an assessment of the effectiveness of using SOF in peace operations.

Militaries use SOF for a variety of purposes, not least of which is increasing offensive capabilities for themselves and allied nations. Many countries develop these units for counterterrorism operations, often in conjunction with and through training from the U.S. As one of the primary founders of these “special” soldiers and missions, the U.S. trains and conducts joint operations with partner nations around the world. That breadth does not depend on a singular focus for those missions, however, as SOF have a diverse portfolio, something also taught to allied special units.

The Use of Special Operations in Conflict Resolution: Assessing the Value of Peace Warriors PDF