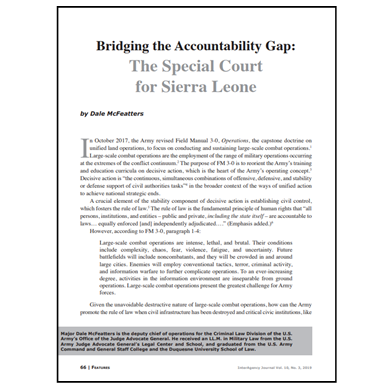 Bridging the Accountability Gap: The Special Court for Sierra Leone
by Dale McFeatters 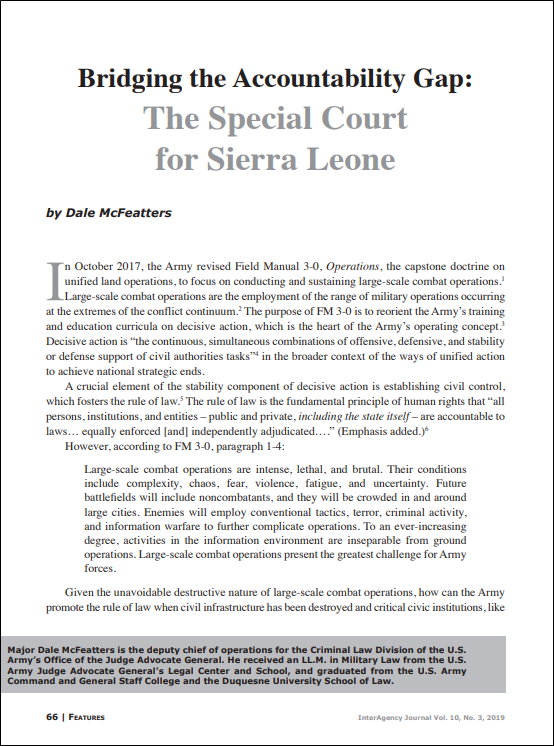 In October 2017, the Army revised Field Manual 3-0, Operations, the capstone doctrine on unified land operations, to focus on conducting and sustaining large-scale combat operations. Large-scale combat operations are the employment of the range of military operations occurring at the extremes of the conflict continuum. The purpose of FM 3-0 is to reorient the Army’s training and education curricula on decisive action, which is the heart of the Army’s operating concept. Decisive action is “the continuous, simultaneous combinations of offensive, defensive, and stability or defense support of civil authorities tasks” in the broader context of the ways of unified action to achieve national strategic ends.

A crucial element of the stability component of decisive action is establishing civil control, which fosters the rule of law. The rule of law is the fundamental principle of human rights that “all persons, institutions, and entities – public and private, including the state itself – are accountable to laws… equally enforced [and] independently adjudicated….” (Emphasis added.)

Large-scale combat operations are intense, lethal, and brutal. Their conditions include complexity, chaos, fear, violence, fatigue, and uncertainty. Future battlefields will include noncombatants, and they will be crowded in and around large cities. Enemies will employ conventional tactics, terror, criminal activity, and information warfare to further complicate operations. To an ever-increasing degree, activities in the information environment are inseparable from ground operations. Large-scale combat operations present the greatest challenge for Army forces…