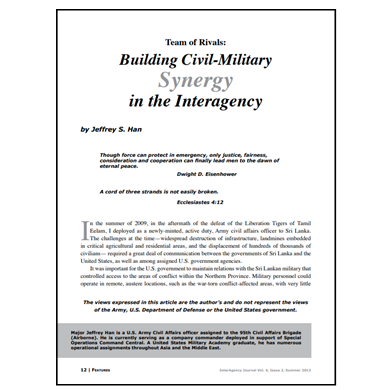 Team of Rivals: Building Civil-Military Synergy in the Interagency
by Jeffrey S. Han 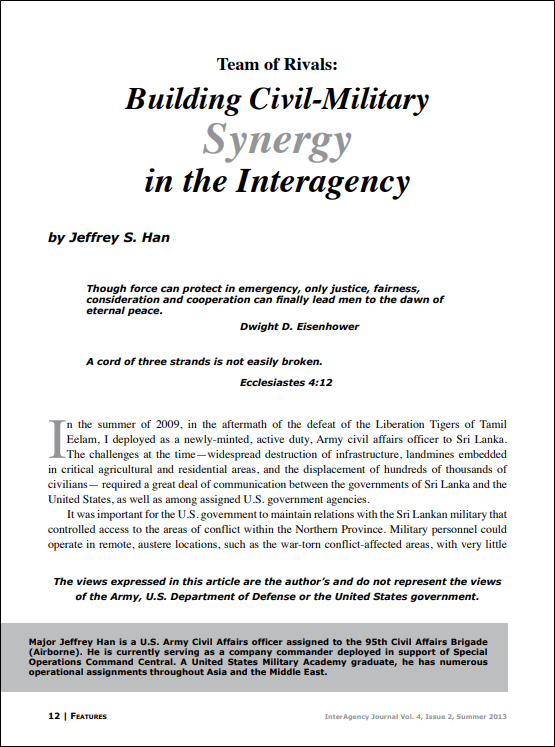 In the summer of 2009, in the aftermath of the defeat of the Liberation Tigers of Tamil Eelam, I deployed as a newly-minted, active duty, Army civil affairs officer to Sri Lanka. The challenges at the time—widespread destruction of infrastructure, landmines embedded in critical agricultural and residential areas, and the displacement of hundreds of thousands of civilians—required a great deal of communication between the governments of Sri Lanka and the United States, as well as among assigned U.S. government agencies.

It was important for the U.S. government to maintain relations with the Sri Lankan military that controlled access to the areas of conflict within the Northern Province. Military personnel could operate in remote, austere locations, such as the war-torn conflict-affected areas, with very little logistical support. At the same time, the U.S. Department of Defense (DoD) had the potential to provide a substantial amount of funding and supplies through various humanitarian assistance programs. However, it took time, arguably the entire eleven-month deployment, for embassy representatives to fully understand the benefit of having military representatives assigned to the embassy and how they could be integrated into other interagency programs.

A majority of the civilian U.S. government representatives at the embassy had a difficult time understanding the role of military personnel assigned to a country outside a combat zone…

Team of Rivals: Building Civil-Military Synergy in the Interagency PDF