Featured Article: Bureaucracy in Service of a Madman 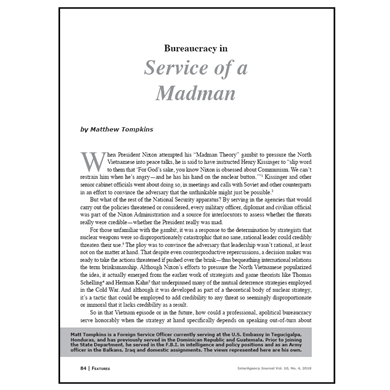 Bureaucracy in Service of a Madman
by Matthew Tompkins 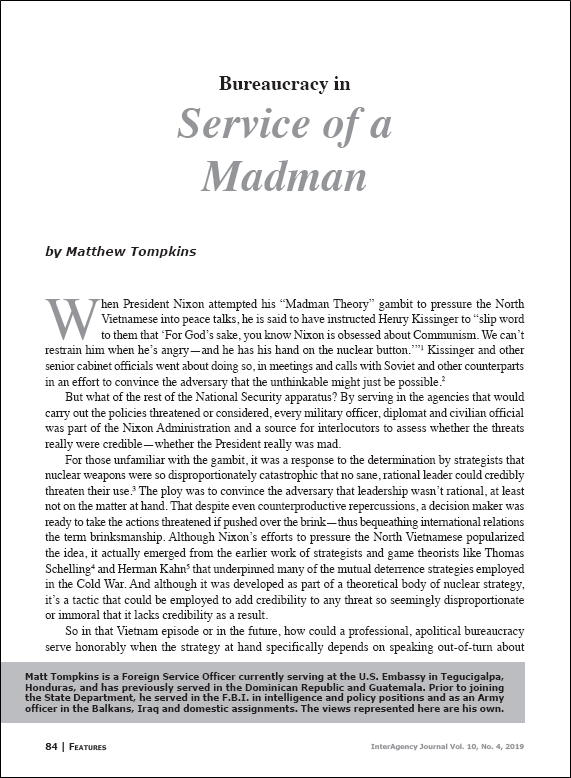 When President Nixon attempted his “Madman Theory” gambit to pressure the North
Vietnamese into peace talks, he is said to have instructed Henry Kissinger to “slip word
to them that ‘For God’s sake, you know Nixon is obsessed about Communism. We can’t
restrain him when he’s angry—and he has his hand on the nuclear button.’” Kissinger and other senior cabinet officials went about doing so, in meetings and calls with Soviet and other counterparts in an effort to convince the adversary that the unthinkable might just be possible.

But what of the rest of the National Security apparatus? By serving in the agencies that would carry out the policies threatened or considered, every military officer, diplomat and civilian official was part of the Nixon Administration and a source for interlocutors to assess whether the threats really were credible—whether the President really was mad.

For those unfamiliar with the gambit, it was a response to the determination by strategists that nuclear weapons were so disproportionately catastrophic that no sane, rational leader could credibly threaten their use. The ploy was to convince the adversary that leadership wasn’t rational, at least not on the matter at hand. That despite even counterproductive repercussions, a decision maker was ready to take the actions threatened if pushed over the brink—thus bequeathing international relations the term brinksmanship. Although Nixon’s efforts to pressure the North Vietnamese popularized the idea, it actually emerged from the earlier work of strategists and game theorists…

Bureaucracy in Service of a Madman PDF