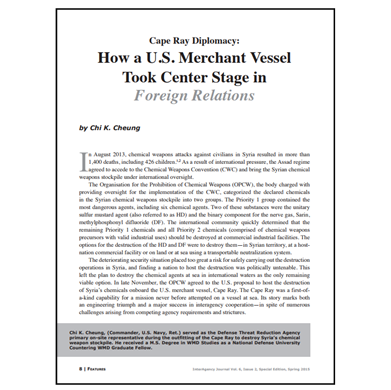 In August 2013, chemical weapons attacks against civilians in Syria resulted in more than 1,400 deaths, including 426 children. As a result of international pressure, the Assad regime agreed to accede to the Chemical Weapons Convention (CWC) and bring the Syrian chemical weapons stockpile under international oversight.

The Organisation for the Prohibition of Chemical Weapons (OPCW), the body charged with providing oversight for the implementation of the CWC, categorized the declared chemicals in the Syrian chemical weapons stockpile into two groups. The Priority 1 group contained the most dangerous agents, including six chemical agents. Two of these substances were the unitary sulfur mustard agent (also referred to as HD) and the binary component for the nerve gas, Sarin, methylphosphonyl difluoride (DF). The international community quickly determined that the remaining Priority 1 chemicals and all Priority 2 chemicals (comprised of chemical weapons precursors with valid industrial uses) should be destroyed at commercial industrial facilities. The options for the destruction of the HD and DF were to destroy them—in Syrian territory, at a host nation commercial facility or on land or at sea using a transportable neutralization system.