Featured Article: Chinese Advantages in the Development and Integration of AI… 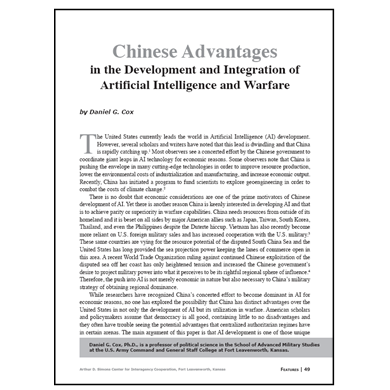 Chinese Advantages in the Development and Integration of Artificial Intelligence and Warfare
by Daniel G. Cox 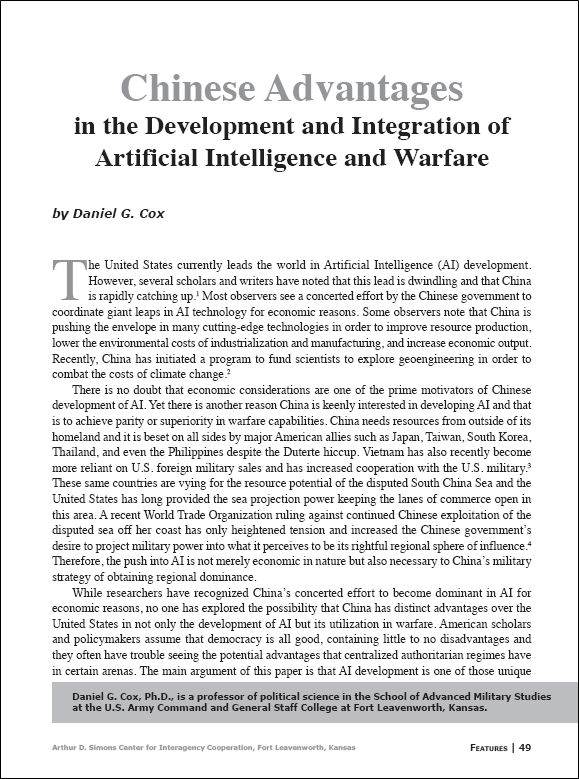 The United States currently leads the world in Artificial Intelligence (AI) development. However, several scholars and writers have noted that this lead is dwindling and that China is rapidly catching up. Most observers see a concerted effort by the Chinese government to coordinate giant leaps in AI technology for economic reasons. Some observers note that China is pushing the envelope in many cutting-edge technologies in order to improve resource production, lower the environmental costs of industrialization and manufacturing, and increase economic output. Recently, China has initiated a program to fund scientists to explore geoengineering in order to combat the costs of climate change.

There is no doubt that economic considerations are one of the prime motivators of Chinese development of AI. Yet there is another reason China is keenly interested in developing AI and that is to achieve parity or superiority in warfare capabilities. China needs resources from outside of its homeland and it is beset on all sides by major American allies such as Japan, Taiwan, South Korea, Thailand, and even the Philippines despite the Duterte hiccup. Vietnam has also recently become more reliant on U.S. foreign military sales and has increased cooperation with the U.S. military. These same countries are vying for the resource potential of the disputed South China Sea and the United States has long provided the sea projection power keeping the lanes of commerce open in this area. A recent World Trade Organization ruling against continued Chinese exploitation of the disputed sea off her coast has only heightened tension and increased the Chinese government’s desire to project military power into what it perceives to be its rightful regional sphere of influence. Therefore, the push into AI is not merely economic in nature but also necessary to China’s military strategy of obtaining regional dominance.

While researchers have recognized China’s concerted effort to become dominant in AI for economic reasons, no one has explored the possibility that China has distinct advantages over the United States in not only the development of AI but its utilization in warfare…