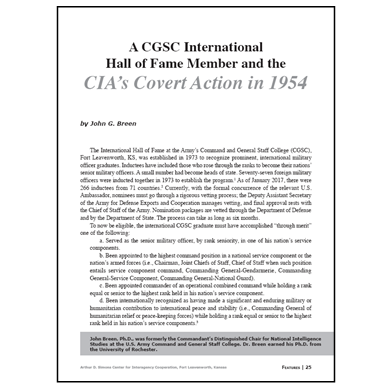 A CGSC International Hall of Fame Member and the CIA’s Covert Action in 1954
by John G. Breen 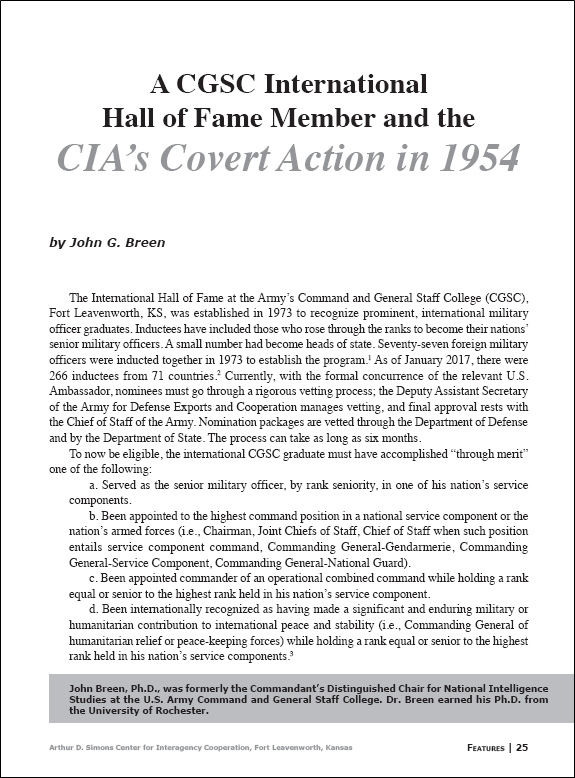 The International Hall of Fame at the Army’s Command and General Staff College (CGSC), Fort Leavenworth, KS, was established in 1973 to recognize prominent, international military officer graduates. Inductees have included those who rose through the ranks to become their nations’ senior military officers. A small number had become heads of state. Seventy-seven foreign military officers were inducted together in 1973 to establish the program. As of January 2017, there were 266 inductees from 71 countries. Currently, with the formal concurrence of the relevant U.S. Ambassador, nominees must go through a rigorous vetting process; the Deputy Assistant Secretary of the Army for Defense Exports and Cooperation manages vetting, and final approval rests with the Chief of Staff of the Army. Nomination packages are vetted through the Department of Defense and by the Department of State. The process can take as long as six months.

To now be eligible, the international CGSC graduate must have accomplished “through merit” one of the following:

Notably, current requirements also state: “Individuals who have attained a qualifying position through means other than military merit are not eligible…”