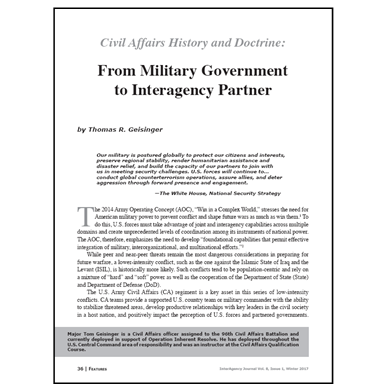 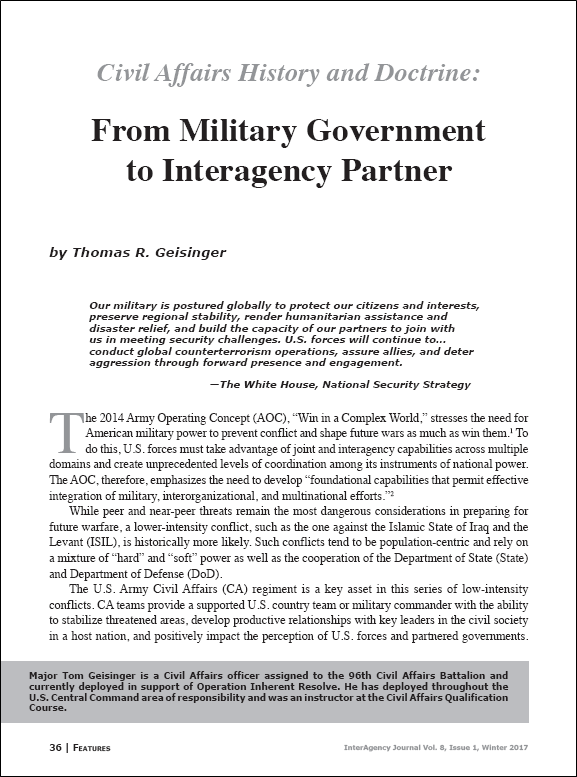 The 2014 Army Operating Concept (AOC), “Win in a Complex World,” stresses the need for American military power to prevent conflict and shape future wars as much as win them.1 To do this, U.S. forces must take advantage of joint and interagency capabilities across multiple domains and create unprecedented levels of coordination among its instruments of national power. The AOC, therefore, emphasizes the need to develop “foundational capabilities that permit effective integration of military, interorganizational, and multinational efforts.”

While peer and near-peer threats remain the most dangerous considerations in preparing for future warfare, a lower-intensity conflict, such as the one against the Islamic State of Iraq and the Levant (ISIL), is historically more likely. Such conflicts tend to be population-centric and rely on a mixture of “hard” and “soft” power as well as the cooperation of the Department of State (State) and Department of Defense (DoD).

The U.S. Army Civil Affairs (CA) regiment is a key asset in this series of low-intensity conflicts. CA teams provide a supported U.S. country team or military commander with the ability to stabilize threatened areas, develop productive relationships with key leaders in the civil society in a host nation, and positively impact the perception of U.S. forces and partnered governments…