Featured Article: The Value of Conceptual Planning During Disasters

The Value of Conceptual Planning During Disasters
by Michael Long 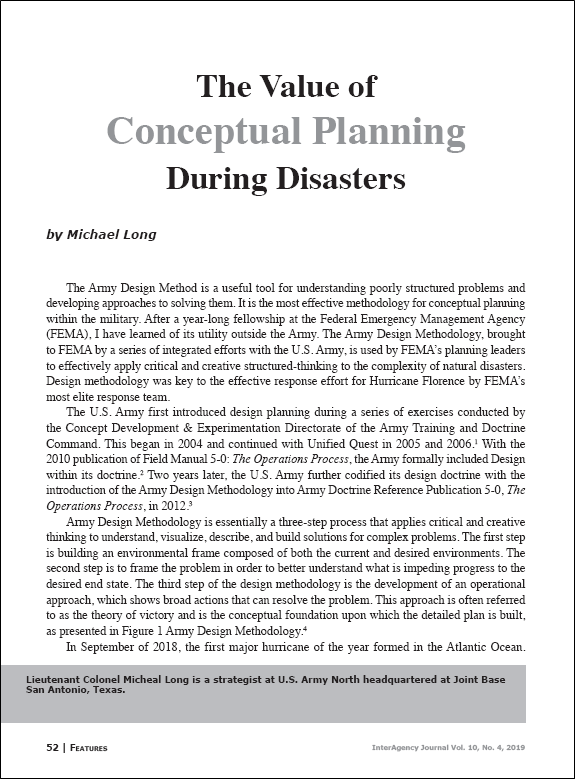 The Army Design Method is a useful tool for understanding poorly structured problems and developing approaches to solving them. It is the most effective methodology for conceptual planning within the military. After a year-long fellowship at the Federal Emergency Management Agency (FEMA), I have learned of its utility outside the Army. The Army Design Methodology, brought to FEMA by a series of integrated efforts with the U.S. Army, is used by FEMA’s planning leaders to effectively apply critical and creative structured-thinking to the complexity of natural disasters. Design methodology was key to the effective response effort for Hurricane Florence by FEMA’s most elite response team.

The U.S. Army first introduced design planning during a series of exercises conducted by
the Concept Development & Experimentation Directorate of the Army Training and Doctrine Command. This began in 2004 and continued with Unified Quest in 2005 and 2006. With the 2010 publication of Field Manual 5-0: The Operations Process, the Army formally included Design within its doctrine. Two years later, the U.S. Army further codified its design doctrine with the introduction of the Army Design Methodology into Army Doctrine Reference Publication 5-0, The Operations Process, in 2012.

The Value of Conceptual Planning During Disasters PDF