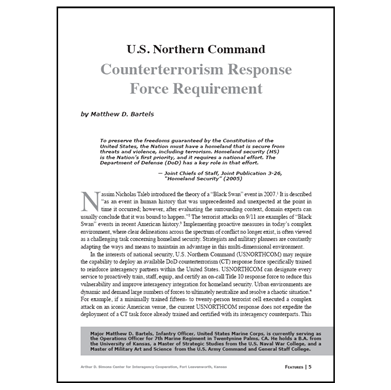 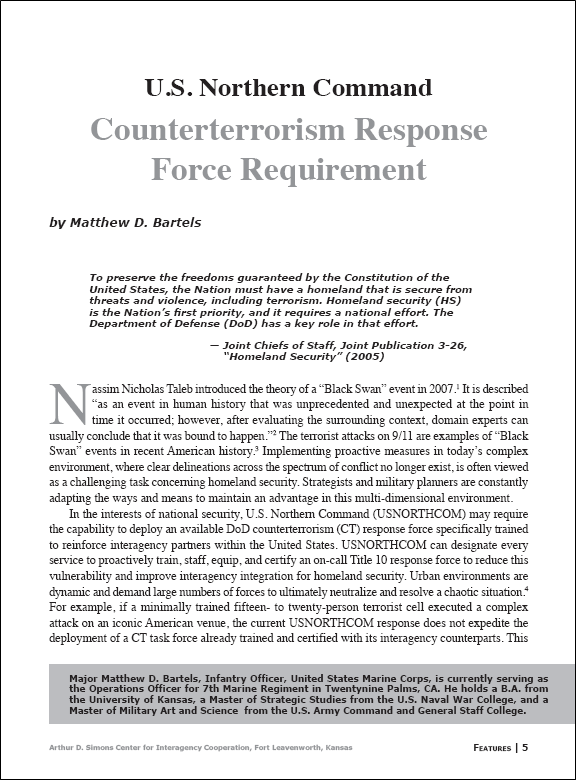 Nassim Nicholas Taleb introduced the theory of a “Black Swan” event in 2007. It is described “as an event in human history that was unprecedented and unexpected at the point in time it occurred; however, after evaluating the surrounding context, domain experts can usually conclude that it was bound to happen.” The terrorist attacks on 9/11 are examples of “Black Swan” events in recent American history. Implementing proactive measures in today’s complex environment, where clear delineations across the spectrum of conflict no longer exist, is often viewed as a challenging task concerning homeland security. Strategists and military planners are constantly adapting the ways and means to maintain an advantage in this multi-dimensional environment.

In the interests of national security, U.S. Northern Command (USNORTHCOM) may require the capability to deploy an available DoD counterterrorism (CT) response force specifically trained to reinforce interagency partners within the United States. USNORTHCOM can designate every service to proactively train, staff, equip, and certify an on-call Title 10 response force to reduce this vulnerability and improve interagency integration for homeland security. Urban environments are dynamic and demand large numbers of forces to ultimately neutralize and resolve a chaotic situation. For example, if a minimally trained fifteen- to twenty-person terrorist cell executed a complex attack on an iconic American venue, the current USNORTHCOM response does not expedite the deployment of a CT task force already trained and certified with its interagency counterparts. This vulnerability can be reduced by tasking a Title 10 asset that will fall under combatant command authority with direct liaison to a federally-led emergency operations center…