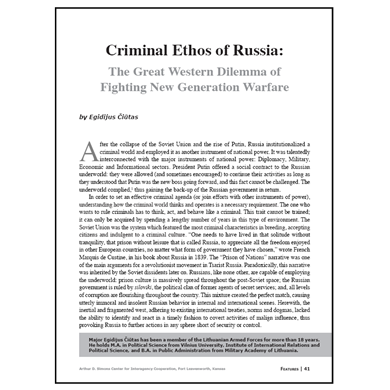 After the collapse of the Soviet Union and the rise of Putin, Russia institutionalized a criminal world and employed it as another instrument of national power. It was talentedly interconnected with the major instruments of national power: Diplomacy, Military, Economic and Informational sectors. President Putin offered a social contract to the Russian underworld: they were allowed (and sometimes encouraged) to continue their activities as long as they understood that Putin was the new boss going forward, and this fact cannot be challenged. The underworld complied,1 thus gaining the back-up of the Russian government in return.

In order to set an effective criminal agenda (or join efforts with other instruments of power), understanding how the criminal world thinks and operates is a necessary requirement. The one who wants to rule criminals has to think, act, and behave like a criminal. This trait cannot be trained; it can only be acquired by spending a lengthy number of years in this type of environment. The Soviet Union was the system which featured the most criminal characteristics in breeding, accepting citizens and indulgent to a criminal culture. “One needs to have lived in that solitude without tranquility, that prison without leisure that is called Russia, to appreciate all the freedom enjoyed in other European countries, no matter what form of government they have chosen,” wrote French Marquis de Custine, in his book about Russia in 1839. The “Prison of Nations” narrative was one of the main arguments for a revolutionist movement in Tsarist Russia. Paradoxically, this narrative was inherited by the Soviet dissidents later on. Russians, like none other, are capable of employing the underworld: prison culture is massively spread throughout the post-Soviet space; the Russian government is ruled by siloviki, the political clan of former agents of secret services; and, all levels of corruption are flourishing throughout the country. This mixture created the perfect match, causing utterly immoral and insolent Russian behavior in internal and international scenes…