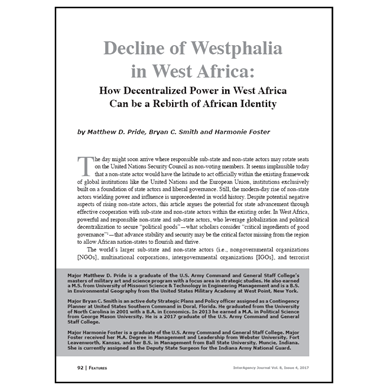 Decline of Westphalia in West Africa:
How Decentralized Power in West Africa Can be a Rebirth of African Identity
by Matthew D. Pride, Bryan C. Smith and Harmonie Foster 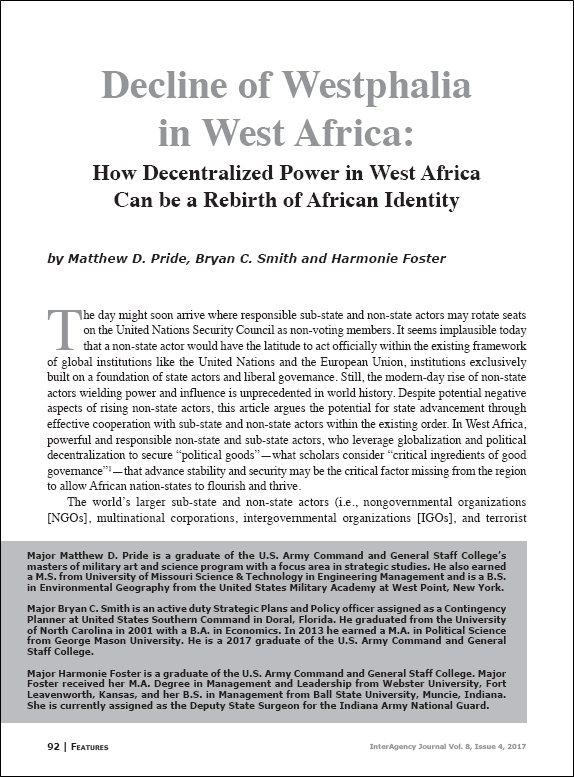 The day might soon arrive where responsible sub-state and non-state actors may rotate seats on the United Nations Security Council as non-voting members. It seems implausible today that a non-state actor would have the latitude to act officially within the existing framework of global institutions like the United Nations and the European Union, institutions exclusively built on a foundation of state actors and liberal governance. Still, the modern-day rise of non-state actors wielding power and influence is unprecedented in world history. Despite potential negative aspects of rising non-state actors, this article argues the potential for state advancement through effective cooperation with sub-state and non-state actors within the existing order. In West Africa, powerful and responsible non-state and sub-state actors, who leverage globalization and political decentralization to secure “political goods”—what scholars consider “critical ingredients of good governance”—that advance stability and security may be the critical factor missing from the region to allow African nation-states to flourish and thrive.