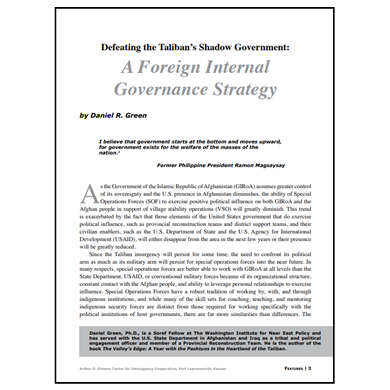 As the Government of the Islamic Republic of Afghanistan (GIRoA) assumes greater control of its sovereignty and the U.S. presence in Afghanistan diminishes, the ability of Special Operations Forces (SOF) to exercise positive political influence on both GIRoA and the Afghan people in support of village stability operations (VSO) will greatly diminish. This trend is exacerbated by the fact that those elements of the United States government that do exercise political influence, such as provincial reconstruction teams and district support teams, and their civilian enablers, such as the U.S. Department of State and the U.S. Agency for International Development (USAID), will either disappear from the area in the next few years or their presence will be greatly reduced.

Since the Taliban insurgency will persist for some time, the need to confront its political arm as much as its military arm will persist for special operations forces into the near future. In many respects, special operations forces are better able to work with GIRoA at all levels than the State Department, USAID, or conventional military forces because of its organizational structure, constant contact with the Afghan people, and ability to leverage personal relationships to exercise influence. Special Operations Forces have a robust tradition of working by, with, and through indigenous institutions, and while many of the skill sets for coaching, teaching, and mentoring indigenous security forces are distinct from those required for working specifically with the political institutions of host governments, there are far more similarities than differences…