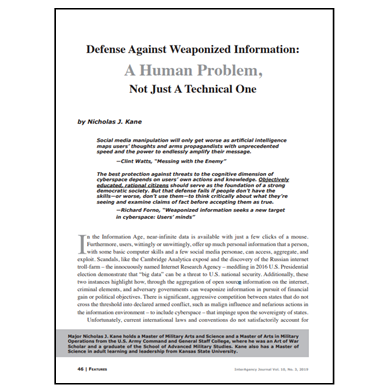 Defense Against Weaponized Information: A Human Problem, Not Just A Technical One
by Nicholas J. Kane 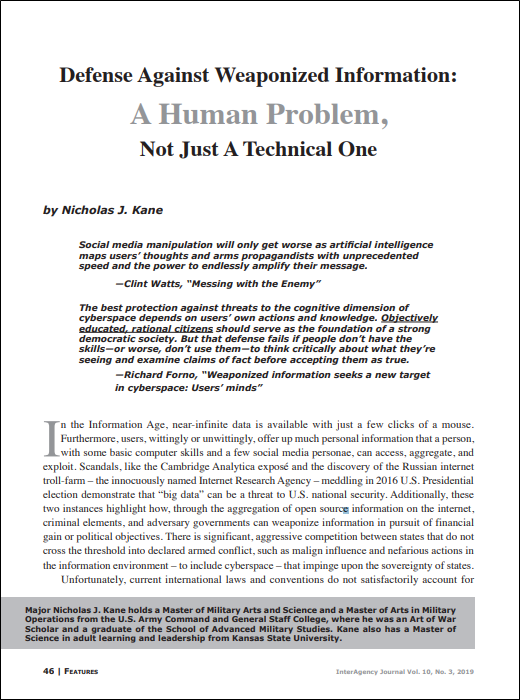 I n the Information Age, near-infinite data is available with just a few clicks of a mouse. Furthermore, users, wittingly or unwittingly, offer up much personal information that a person, with some basic computer skills and a few social media personae, can access, aggregate, and exploit. Scandals, like the Cambridge Analytica exposé and the discovery of the Russian internet troll-farm – the innocuously named Internet Research Agency – meddling in 2016 U.S. Presidential election demonstrate that “big data” can be a threat to U.S. national security. Additionally, these two instances highlight how, through the aggregation of open source information on the internet, criminal elements, and adversary governments can weaponize information in pursuit of financial gain or political objectives. There is significant, aggressive competition between states that do not cross the threshold into declared armed conflict, such as malign influence and nefarious actions in the information environment – to include cyberspace – that impinge upon the sovereignty of states.

Unfortunately, current international laws and conventions do not satisfactorily account for undeclared conflict and non-lethal effects on civilians and states. Under these international laws, cyber intrusions, and weaponized information in the “gray zone” short of armed conflict do not present as clear-cut justification for the use of military force within the Just War theory. This legal murkiness presents Western democratic states with a dilemma: operate aggressively in the information environment and stem the onslaught of malicious activity or maintain the moral high ground…

Defense Against Weaponized Information: A Human Problem, Not Just A Technical One PDF