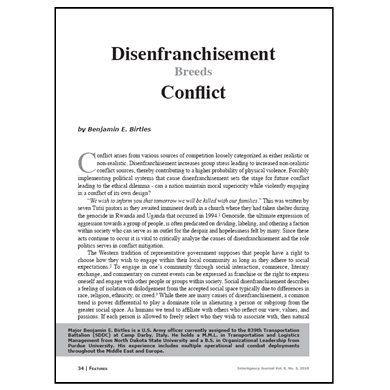 Conflict arises from various sources of competition loosely categorized as either realistic or non-realistic. Disenfranchisement increases group stress leading to increased non-realistic conflict sources, thereby contributing to a higher probability of physical violence. Forcibly implementing political systems that cause disenfranchisement sets the stage for future conflict leading to the ethical dilemma – can a nation maintain moral superiority while violently engaging in a conflict of its own design?

“We wish to inform you that tomorrow we will be killed with our families.” This was written by seven Tutsi pastors as they awaited imminent death in a church where they had taken shelter during the genocide in Rwanda and Uganda that occurred in 1994. Genocide, the ultimate expression of aggression towards a group of people, is often predicated on dividing, labeling, and othering a faction within society who can serve as an outlet for the despair and hopelessness felt by many. Since these acts continue to occur it is vital to critically analyze the causes of disenfranchisement and the role politics serves in conflict mitigation.

The Western tradition of representative government supposes that people have a right to choose how they wish to engage within their local community as long as they adhere to social expectations. To engage in one’s community through social interaction, commerce, literary exchange, and commentary on current events can be expressed as franchise or the right to express oneself and engage with other people or groups within society. Social disenfranchisement describes a feeling of isolation or dislodgement from the accepted social space typically due to differences in race, religion, ethnicity, or creed. While there are many causes of disenfranchisement, a common trend is power differential to play a dominate role in alienating a person or subgroup from the greater social space…