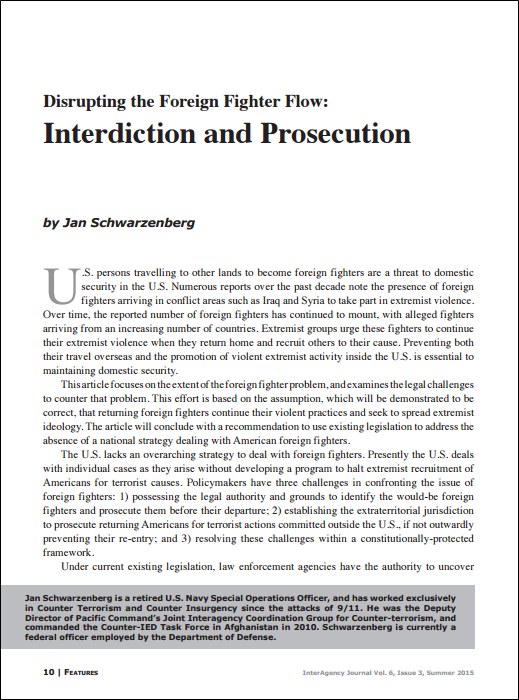 U.S. persons travelling to other lands to become foreign fighters are a threat to domestic security in the U.S. Numerous reports over the past decade note the presence of foreign fighters arriving in conflict areas such as Iraq and Syria to take part in extremist violence. Over time, the reported number of foreign fighters has continued to mount, with alleged fighters arriving from an increasing number of countries. Extremist groups urge these fighters to continue their extremist violence when they return home and recruit others to their cause. Preventing both their travel overseas and the promotion of violent extremist activity inside the U.S. is essential to maintaining domestic security.

This article focuses on the extent of the foreign fighter problem, and examines the legal challenges to counter that problem. This effort is based on the assumption, which will be demonstrated to be correct, that returning foreign fighters continue their violent practices and seek to spread extremist ideology. The article will conclude with a recommendation to use existing legislation to address the absence of a national strategy dealing with American foreign fighters.

The U.S. lacks an overarching strategy to deal with foreign fighters. Presently the U.S. deals with individual cases as they arise without developing a program to halt extremist recruitment of Americans for terrorist causes. Policymakers have three challenges in confronting the issue of foreign fighters…