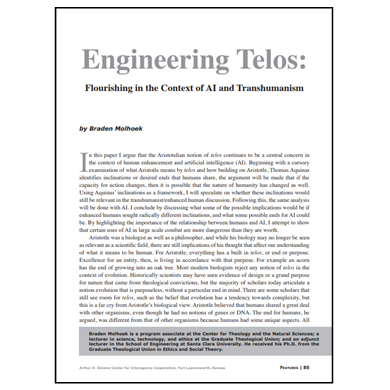 Engineering Telos: Flourishing in the Context of AI and Transhumanism
by Braden Molhoek 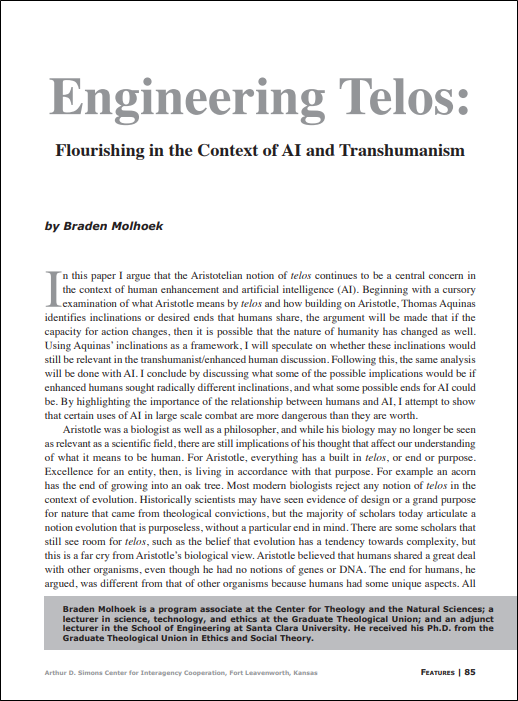 In this paper I argue that the Aristotelian notion of telos continues to be a central concern in the context of human enhancement and artificial intelligence (AI). Beginning with a cursory examination of what Aristotle means by telos and how building on Aristotle, Thomas Aquinas identifies inclinations or desired ends that humans share, the argument will be made that if the capacity for action changes, then it is possible that the nature of humanity has changed as well. Using Aquinas’ inclinations as a framework, I will speculate on whether these inclinations would still be relevant in the transhumanist/enhanced human discussion. Following this, the same analysis will be done with AI. I conclude by discussing what some of the possible implications would be if enhanced humans sought radically different inclinations, and what some possible ends for AI could be. By highlighting the importance of the relationship between humans and AI, I attempt to show that certain uses of AI in large scale combat are more dangerous than they are worth.

Aristotle was a biologist as well as a philosopher, and while his biology may no longer be seen as relevant as a scientific field, there are still implications of his thought that affect our understanding of what it means to be human. For Aristotle, everything has a built in telos, or end or purpose. Excellence for an entity, then, is living in accordance with that purpose. For example an acorn has the end of growing into an oak tree. Most modern biologists reject any notion of telos in the context of evolution. Historically scientists may have seen evidence of design or a grand purpose for nature that came from theological convictions, but the majority of scholars today articulate a notion evolution that is purposeless, without a particular end in mind. There are some scholars that still see room for telos, such as the belief that evolution has a tendency towards complexity, but this is a far cry from Aristotle’s biological view. Aristotle believed that humans shared a great deal with other organisms, even though he had no notions of genes or DNA. The end for humans, he argued, was different from that of other organisms because humans had some unique aspects…

Engineering Telos: Flourishing in the Context of AI and Transhumanism PDF