Evolving Band-Aids to Global Crisis: For Want of U.S. Leadership
by Mark Sweberg and Allan Childers 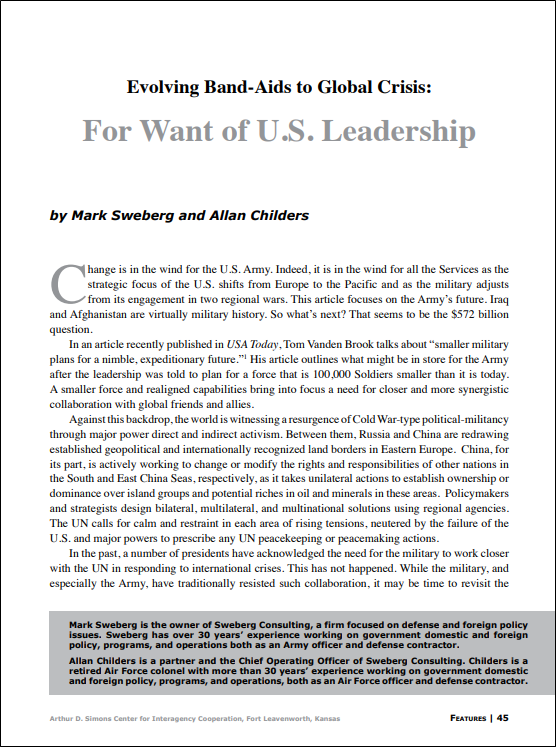 Change is in the wind for the U.S. Army. Indeed, it is in the wind for all the Services as the strategic focus of the U.S. shifts from Europe to the Pacific and as the military adjusts from its engagement in two regional wars. This article focuses on the Army’s future. Iraq and Afghanistan are virtually military history. So what’s next? That seems to be the $572 billion question.

In an article recently published in USA Today, Tom Vanden Brook talks about “smaller military plans for a nimble, expeditionary future.” His article outlines what might be in store for the Army after the leadership was told to plan for a force that is 100,000 Soldiers smaller than it is today. A smaller force and realigned capabilities bring into focus a need for closer and more synergistic collaboration with global friends and allies.

Against this backdrop, the world is witnessing a resurgence of Cold War-type political-militancy through major power direct and indirect activism. Between them, Russia and China are redrawing established geopolitical and internationally recognized land borders in Eastern Europe. China, for its part, is actively working to change or modify the rights and responsibilities of other nations in the South and East China Seas, respectively, as it takes unilateral actions to establish ownership or dominance over island groups and potential riches in oil and minerals in these areas. Policymakers and strategists design bilateral, multilateral, and multinational solutions using regional agencies. The UN calls for calm and restraint in each area of rising tensions, neutered by the failure of the U.S. and major powers to prescribe any UN peacekeeping or peacemaking actions.

In the past, a number of presidents have acknowledged the need for the military to work closer with the UN in responding to international crises. This has not happened..