Faith-Based Peacebuilding in the Former Yugoslavia
by David Steele 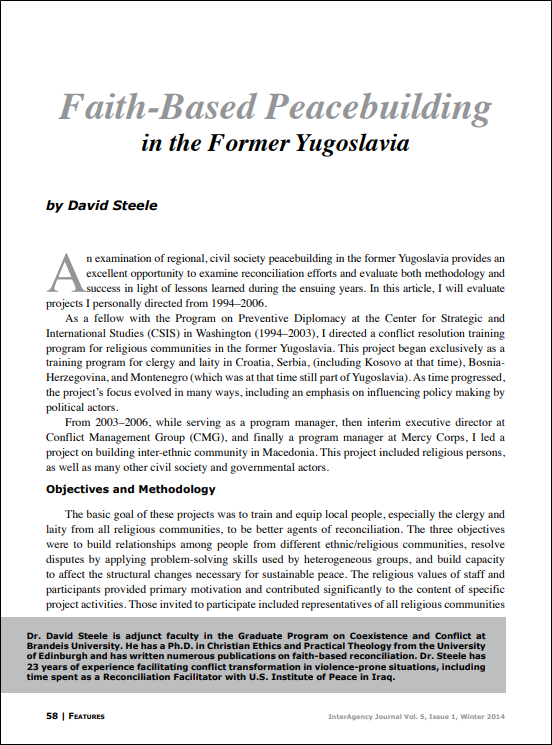 An examination of regional, civil society peacebuilding in the former Yugoslavia provides an excellent opportunity to examine reconciliation efforts and evaluate both methodology and success in light of lessons learned during the ensuing years. In this article, I will evaluate projects I personally directed from 1994–2006.

As a fellow with the Program on Preventive Diplomacy at the Center for Strategic and International Studies (CSIS) in Washington (1994–2003), I directed a conflict resolution training program for religious communities in the former Yugoslavia. This project began exclusively as a training program for clergy and laity in Croatia, Serbia, (including Kosovo at that time), Bosnia-Herzegovina, and Montenegro (which was at that time still part of Yugoslavia). As time progressed, the project’s focus evolved in many ways, including an emphasis on influencing policy making by political actors.

From 2003–2006, while serving as a program manager, then interim executive director at Conflict Management Group (CMG), and finally a program manager at Mercy Corps, I led a project on building inter-ethnic community in Macedonia. This project included religious persons, as well as many other civil society and governmental actors.

The basic goal of these projects was to train and equip local people, especially the clergy and laity from all religious communities, to be better agents of reconciliation…