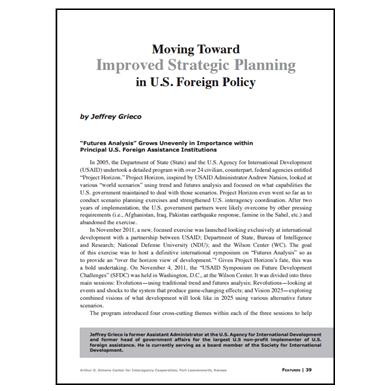 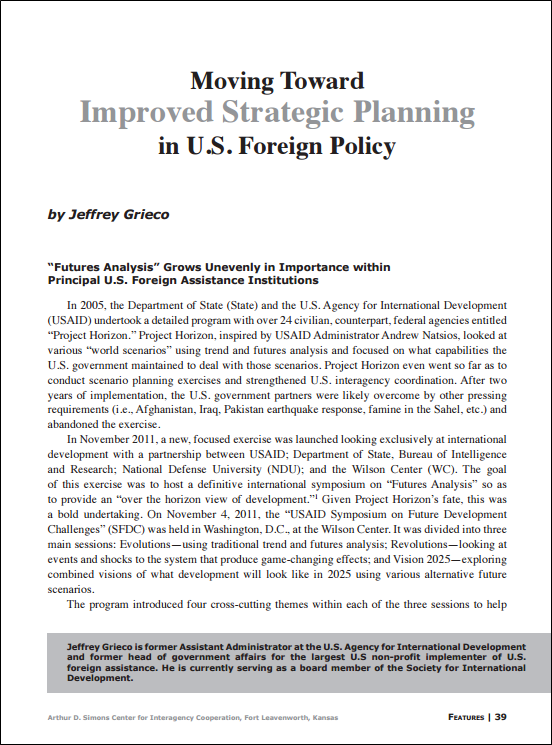 In 2005, the Department of State (State) and the U.S. Agency for International Development (USAID) undertook a detailed program with over 24 civilian, counterpart, federal agencies entitled “Project Horizon.” Project Horizon, inspired by USAID Administrator Andrew Natsios, looked at various “world scenarios” using trend and futures analysis and focused on what capabilities the U.S. government maintained to deal with those scenarios. Project Horizon even went so far as to conduct scenario planning exercises and strengthened U.S. interagency coordination. After two years of implementation, the U.S. government partners were likely overcome by other pressing
requirements (i.e., Afghanistan, Iraq, Pakistan earthquake response, famine in the Sahel, etc.) and abandoned the exercise.

In November 2011, a new, focused exercise was launched looking exclusively at international development with a partnership between USAID; Department of State, Bureau of Intelligence and Research; National Defense University (NDU); and the Wilson Center (WC). The goal of this exercise was to host a definitive international symposium on “Futures Analysis” so as to provide an “over the horizon view of development.” Given Project Horizon’s fate, this was
a bold undertaking. On November 4, 2011, the “USAID Symposium on Future Development Challenges” (SFDC) was held in Washington, D.C., at the Wilson Center. It was divided into three main sessions: Evolutions—using traditional trend and futures analysis; Revolutions—looking at events and shocks to the system that produce game-changing effects; and Vision 2025—exploring combined visions of what development will look like in 2025 using various alternative future
scenarios…