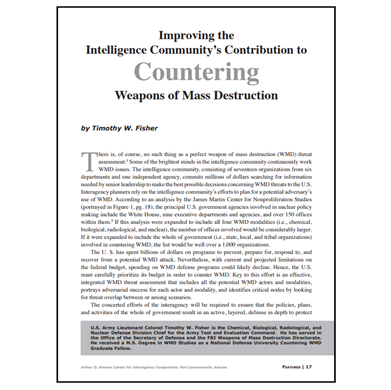 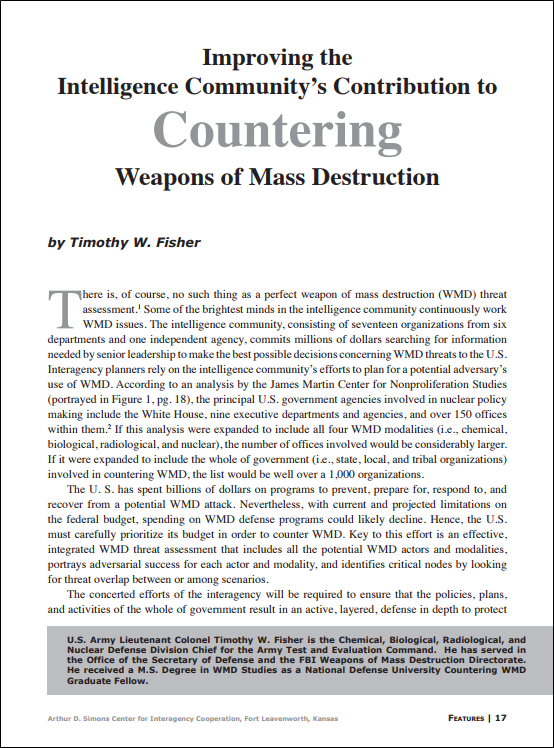 There is, of course, no such thing as a perfect weapon of mass destruction (WMD) threat assessment. Some of the brightest minds in the intelligence community continuously work WMD issues. The intelligence community, consisting of seventeen organizations from six departments and one independent agency, commits millions of dollars searching for information needed by senior leadership to make the best possible decisions concerning WMD threats to the U.S. Interagency planners rely on the intelligence community’s efforts to plan for a potential adversary’s use of WMD. According to an analysis by the James Martin Center for Nonproliferation Studies, the principal U.S. government agencies involved in nuclear policy making include the White House, nine executive departments and agencies, and over 150 offices within them. If this analysis were expanded to include all four WMD modalities (i.e., chemical, biological, radiological, and nuclear), the number of offices involved would be considerably larger. If it were expanded to include the whole of government (i.e., state, local, and tribal organizations) involved in countering WMD, the list would be well over a 1,000 organizations.

The U. S. has spent billions of dollars on programs to prevent, prepare for, respond to, and recover from a potential WMD attack. Nevertheless, with current and projected limitations on the federal budget, spending on WMD defense programs could likely decline. Hence, the U.S. must carefully prioritize its budget in order to counter WMD. Key to this effort is an effective, integrated WMD threat assessment that includes all the potential WMD actors and modalities, portrays adversarial success for each actor and modality, and identifies critical nodes by looking for threat overlap between or among scenarios…