Featured Article: Interagency Approaches to Prevent the Reoccurrence of Conflict in Sierra Leone 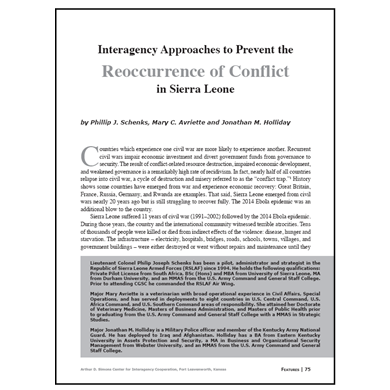 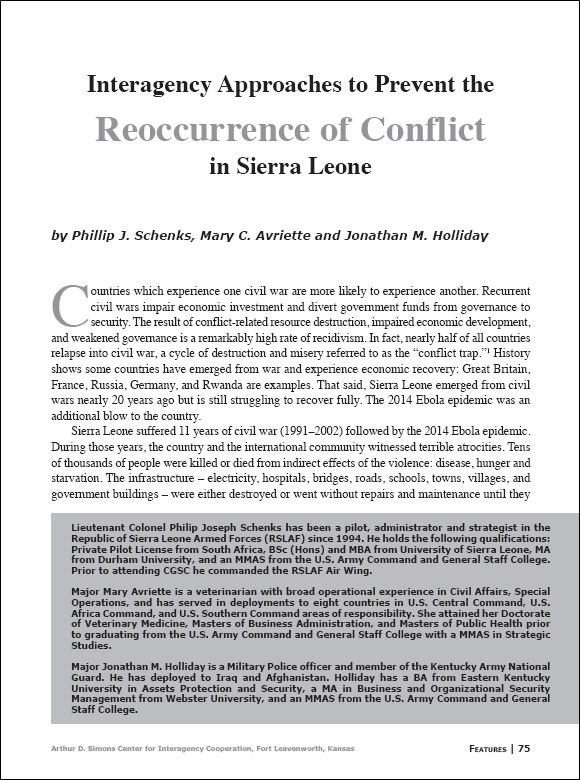 Countries which experience one civil war are more likely to experience another. Recurrent civil wars impair economic investment and divert government funds from governance to security. The result of conflict-related resource destruction, impaired economic development, and weakened governance is a remarkably high rate of recidivism. In fact, nearly half of all countries relapse into civil war, a cycle of destruction and misery referred to as the “conflict trap.” History shows some countries have emerged from war and experience economic recovery: Great Britain, France, Russia, Germany, and Rwanda are examples. That said, Sierra Leone emerged from civil wars nearly 20 years ago but is still struggling to recover fully. The 2014 Ebola epidemic was an additional blow to the country.

Sierra Leone suffered 11 years of civil war (1991–2002) followed by the 2014 Ebola epidemic. During those years, the country and the international community witnessed terrible atrocities. Tens of thousands of people were killed or died from indirect effects of the violence: disease, hunger and starvation. The infrastructure – electricity, hospitals, bridges, roads, schools, towns, villages, and government buildings – were either destroyed or went without repairs and maintenance until they collapsed. Sierra Leone possesses substantial mineral, agricultural and marine resources, but it has been struggling with economic recovery after the civil war, and particularly since the Ebola crisis…