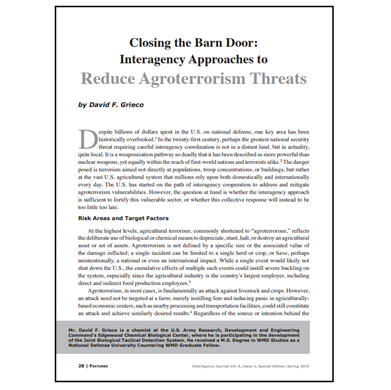 Despite billions of dollars spent in the U.S. on national defense, one key area has been historically overlooked. In the twenty-first century, perhaps the greatest national security threat requiring careful interagency coordination is not in a distant land, but in actuality, quite local. It is a weaponization pathway so deadly that it has been described as more powerful than nuclear weapons, yet equally within the reach of first-world nations and terrorists alike. The danger posed is terrorism aimed not directly at populations, troop concentrations, or buildings, but rather at the vast U.S. agricultural system that millions rely upon both domestically and internationally every day. The U.S. has started on the path of interagency cooperation to address and mitigate agroterrorism vulnerabilities. However, the question at hand is whether the interagency approach is sufficient to fortify this vulnerable sector, or whether this collective response will instead to be too little too late.

At the highest levels, agricultural terrorism, commonly shortened to “agroterrorism,” reflects the deliberate use of biological or chemical means to depreciate, stunt, halt, or destroy an agricultural asset or set of assets. Agroterrorism is not defined by a specific size or the associated value of the damage inflicted; a single incident can be limited to a single herd or crop, or have, perhaps unintentionally, a national or even an international impact. While a single event would likely not shut down the U.S., the cumulative effects of multiple such events could instill severe buckling on the system, especially since the agricultural industry is the country’s largest employer, including direct and indirect food production employees.

Agroterrorism, in most cases, is fundamentally an attack against livestock and crops. However, an attack need not be targeted at a farm; merely instilling fear and inducing panic in agriculturally based economic centers, such as nearby processing and transportation facilities, could still constitute an attack…