Featured Article: Is the Morality of War Plausible in a Diverse World? 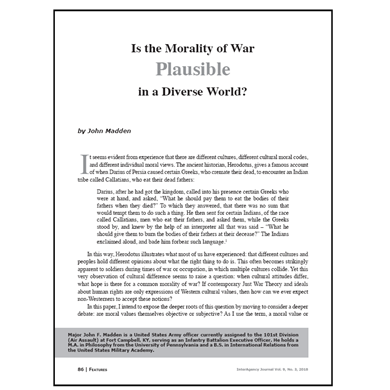 Is the Morality of War Plausible in a Diverse World?
by John Madden 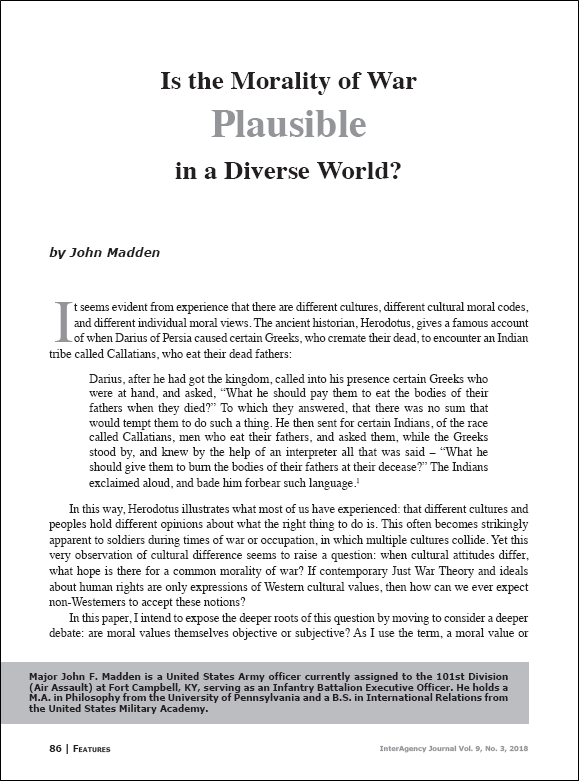 It seems evident from experience that there are different cultures, different cultural moral codes, and different individual moral views. The ancient historian, Herodotus, gives a famous account of when Darius of Persia caused certain Greeks, who cremate their dead, to encounter an Indian tribe called Callatians, who eat their dead fathers:

Darius, after he had got the kingdom, called into his presence certain Greeks who were at hand, and asked, “What he should pay them to eat the bodies of their fathers when they died?” To which they answered, that there was no sum that would tempt them to do such a thing. He then sent for certain Indians, of the race called Callatians, men who eat their fathers, and asked them, while the Greeks stood by, and knew by the help of an interpreter all that was said – “What he should give them to burn the bodies of their fathers at their decease?” The Indians exclaimed aloud, and bade him forbear such language.

In this way, Herodotus illustrates what most of us have experienced: that different cultures and peoples hold different opinions about what the right thing to do is. This often becomes strikingly apparent to soldiers during times of war or occupation, in which multiple cultures collide. Yet this very observation of cultural difference seems to raise a question: when cultural attitudes differ, what hope is there for a common morality of war? If contemporary Just War Theory and ideals about human rights are only expressions of Western cultural values, then how can we ever expect non-Westerners to accept these notions?

In this paper, I intend to expose the deeper roots of this question by moving to consider a deeper debate…

Is the Morality of War Plausible in a Diverse World? PDF