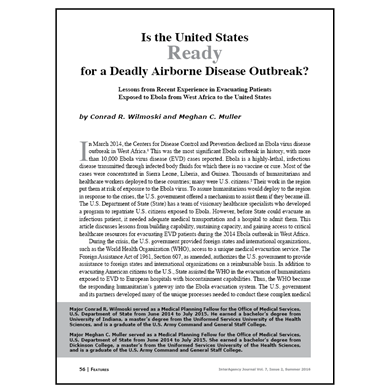 Is the United States Ready for a Deadly Airborne Disease Outbreak?
by Conrad R. Wilmoski and Meghan C. Muller 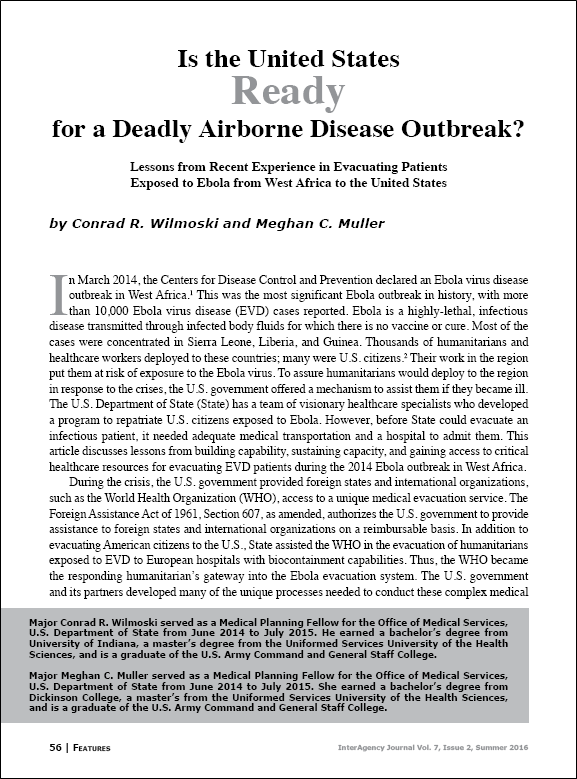 In March 2014, the Centers for Disease Control and Prevention declared an Ebola virus disease outbreak in West Africa. This was the most significant Ebola outbreak in history, with more than 10,000 Ebola virus disease (EVD) cases reported. Ebola is a highly-lethal, infectious disease transmitted through infected body fluids for which there is no vaccine or cure. Most of the cases were concentrated in Sierra Leone, Liberia, and Guinea. Thousands of humanitarians and healthcare workers deployed to these countries; many were U.S. citizens. Their work in the region put them at risk of exposure to the Ebola virus. To assure humanitarians would deploy to the region in response to the crises, the U.S. government offered a mechanism to assist them if they became ill. The U.S. Department of State (State) has a team of visionary healthcare specialists who developed
a program to repatriate U.S. citizens exposed to Ebola. However, before State could evacuate an infectious patient, it needed adequate medical transportation and a hospital to admit them. This article discusses lessons from building capability, sustaining capacity, and gaining access to critical healthcare resources for evacuating EVD patients during the 2014 Ebola outbreak in West Africa.

During the crisis, the U.S. government provided foreign states and international organizations, such as the World Health Organization (WHO), access to a unique medical evacuation service. The Foreign Assistance Act of 1961, Section 607, as amended, authorizes the U.S. government to provide assistance to foreign states and international organizations on a reimbursable basis. In addition to evacuating American citizens to the U.S., State assisted the WHO in the evacuation of humanitarians exposed to EVD to European hospitals with biocontainment capabilities. Thus, the WHO became the responding humanitarian’s gateway into the Ebola evacuation system. The U.S. government and its partners developed many of the unique processes needed to conduct these complex medical evacuations after the Ebola crisis began…

Is the United States Ready for a Deadly Airborne Disease Outbreak? PDF