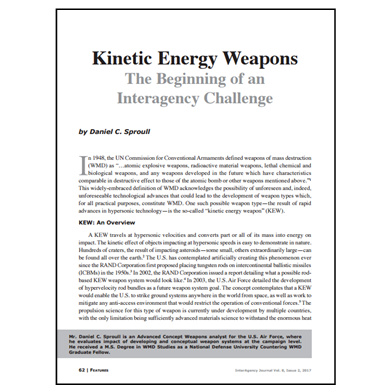 Kinetic Energy Weapons: The Beginning of an Interagency Challenge
by Daniel C. Sproull 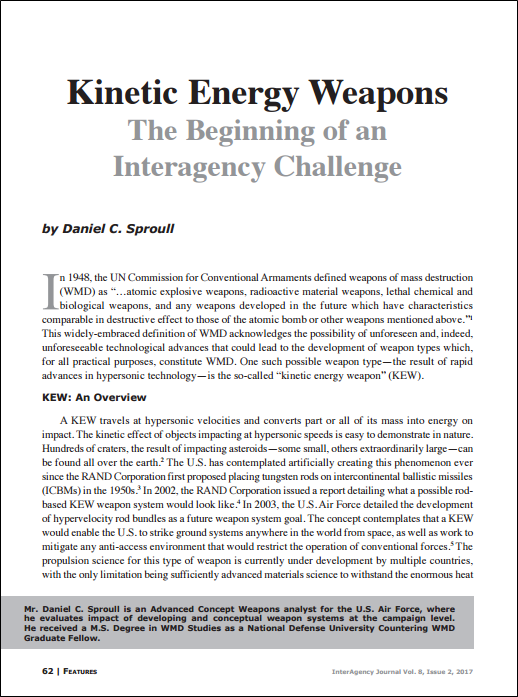 In 1948, the UN Commission for Conventional Armaments defined weapons of mass destruction (WMD) as “…atomic explosive weapons, radioactive material weapons, lethal chemical and biological weapons, and any weapons developed in the future which have characteristics comparable in destructive effect to those of the atomic bomb or other weapons mentioned above.” This widely-embraced definition of WMD acknowledges the possibility of unforeseen and, indeed, unforeseeable technological advances that could lead to the development of weapon types which, for all practical purposes, constitute WMD. One such possible weapon type—the result of rapid advances in hypersonic technology—is the so-called “kinetic energy weapon” (KEW).

A KEW travels at hypersonic velocities and converts part or all of its mass into energy on impact. The kinetic effect of objects impacting at hypersonic speeds is easy to demonstrate in nature. Hundreds of craters, the result of impacting asteroids—some small, others extraordinarily large—can be found all over the earth. The U.S. has contemplated artificially creating this phenomenon ever since the RAND Corporation first proposed placing tungsten rods on intercontinental ballistic missiles (ICBMs) in the 1950s. In 2002, the RAND Corporation issued a report detailing what a possible rodbased KEW weapon system would look like. In 2003, the U.S. Air Force detailed the development of hypervelocity rod bundles as a future weapon system goal. The concept contemplates that a KEW would enable the U.S. to strike ground systems anywhere in the world from space, as well as work to mitigate any anti-access environment that would restrict the operation of conventional forces. The propulsion science for this type of weapon is currently under development by multiple countries…

Kinetic Energy Weapons: The Beginning of an Interagency Challenge PDF