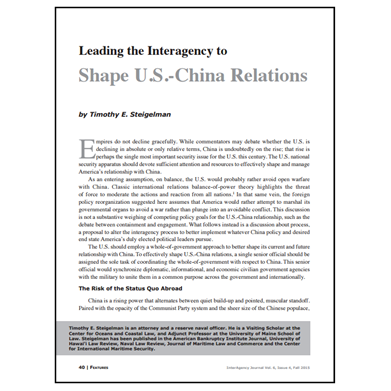 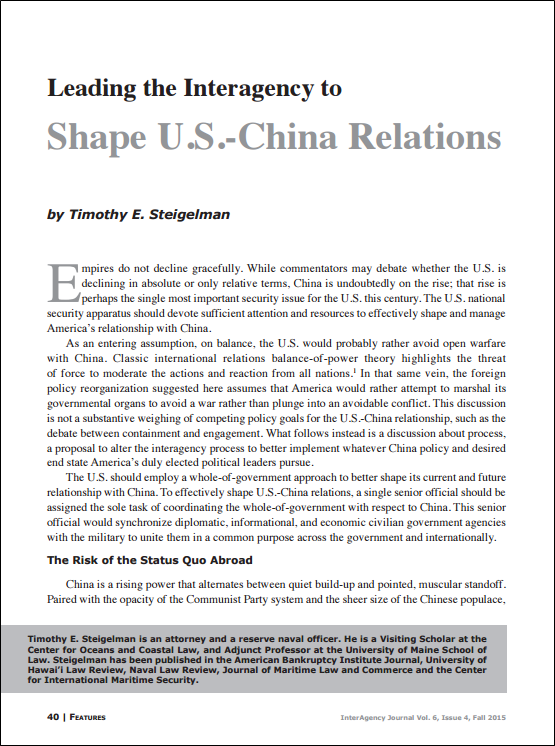 Empires do not decline gracefully. While commentators may debate whether the U.S. is declining in absolute or only relative terms, China is undoubtedly on the rise; that rise is perhaps the single most important security issue for the U.S. this century. The U.S. national security apparatus should devote sufficient attention and resources to effectively shape and manage America’s relationship with China.

As an entering assumption, on balance, the U.S. would probably rather avoid open warfare with China. Classic international relations balance-of-power theory highlights the threat of force to moderate the actions and reaction from all nations. In that same vein, the foreign policy reorganization suggested here assumes that America would rather attempt to marshal its governmental organs to avoid a war rather than plunge into an avoidable conflict. This discussion is not a substantive weighing of competing policy goals for the U.S.-China relationship, such as the debate between containment and engagement. What follows instead is a discussion about process, a proposal to alter the interagency process to better implement whatever China policy and desired end state America’s duly elected political leaders pursue.

The U.S. should employ a whole-of-government approach to better shape its current and future relationship with China. To effectively shape U.S.-China relations, a single senior official should be assigned the sole task of coordinating the whole-of-government with respect to China...