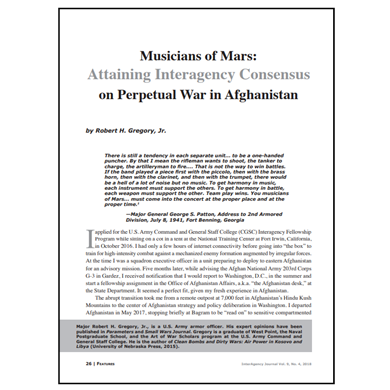 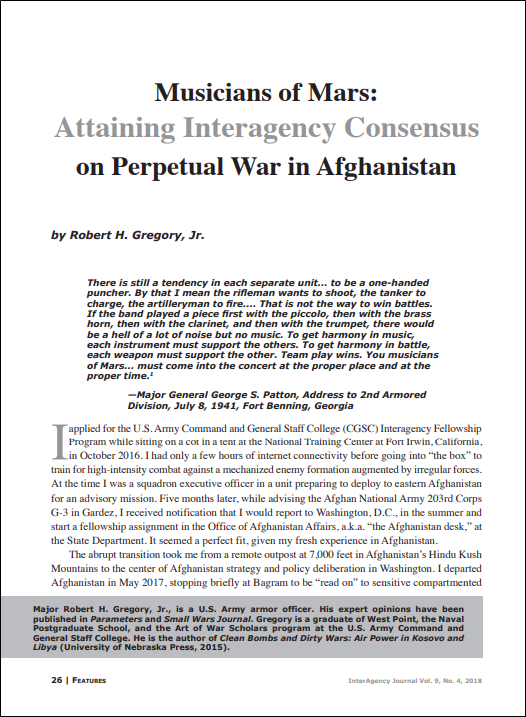 There is still a tendency in each separate unit… to be a one-handed puncher. By that I mean the rifleman wants to shoot, the tanker to charge, the artilleryman to fire…. That is not the way to win battles. If the band played a piece first with the piccolo, then with the brass horn, then with the clarinet, and then with the trumpet, there would be a hell of a lot of noise but no music. To get harmony in music, each instrument must support the others. To get harmony in battle, each weapon must support the other. Team play wins. You musicians of Mars… must come into the concert at the proper place and at the
proper time.

I applied for the U.S. Army Command and General Staff College (CGSC) Interagency Fellowship Program while sitting on a cot in a tent at the National Training Center at Fort Irwin, California, in October 2016. I had only a few hours of internet connectivity before going into “the box” to train for high-intensity combat against a mechanized enemy formation augmented by irregular forces. At the time I was a squadron executive officer in a unit preparing to deploy to eastern Afghanistan for an advisory mission. Five months later, while advising the Afghan National Army 203rd Corps G-3 in Gardez, I received notification that I would report to Washington, D.C., in the summer and start a fellowship assignment in the Office of Afghanistan Affairs, a.k.a. “the Afghanistan desk,” at the State Department. It seemed a perfect fit, given my fresh experience in Afghanistan.

The abrupt transition took me from a remote outpost at 7,000 feet in Afghanistan’s Hindu Kush Mountains to the center of Afghanistan strategy and policy deliberation in Washington. I departed Afghanistan in May 2017, stopping briefly at Bagram to be “read on” to sensitive compartmented information, a key prerequisite for starting the fellowship. Ironically, I learned far more about Afghanistan—from a foreign policy standpoint—while in Washington than when in the Hindu Kush…