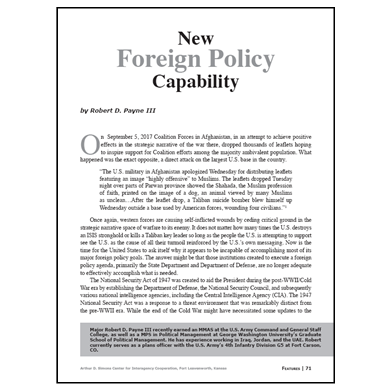 On September 5, 2017 Coalition Forces in Afghanistan, in an attempt to achieve positive effects in the strategic narrative of the war there, dropped thousands of leaflets hoping to inspire support for Coalition efforts among the majority ambivalent population. What happened was the exact opposite, a direct attack on the largest U.S. base in the country.

“The U.S. military in Afghanistan apologized Wednesday for distributing leaflets featuring an image “highly offensive” to Muslims. The leaflets dropped Tuesday night over parts of Parwan province showed the Shahada, the Muslim profession of faith, printed on the image of a dog, an animal viewed by many Muslims as unclean… After the leaflet drop, a Taliban suicide bomber blew himself up Wednesday outside a base used by American forces, wounding four civilians.”

Once again, western forces are causing self-inflicted wounds by ceding critical ground in the strategic narrative space of warfare to its enemy. It does not matter how many times the U.S. destroys an ISIS stronghold or kills a Taliban key leader so long as the people the U.S. is attempting to support see the U.S. as the cause of all their turmoil reinforced by the U.S.’s own messaging. Now is the time for the United States to ask itself why it appears to be incapable of accomplishing most of its major foreign policy goals. The answer might be that those institutions created to execute a foreign policy agenda, primarily the State Department and Department of Defense, are no longer adequate to effectively accomplish what is needed…