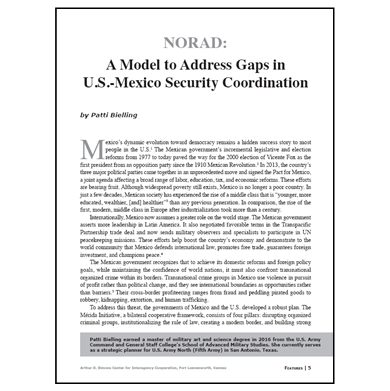 NORAD: A Model to Address Gaps in U.S.-Mexico Security Coordination
by Patti Bielling 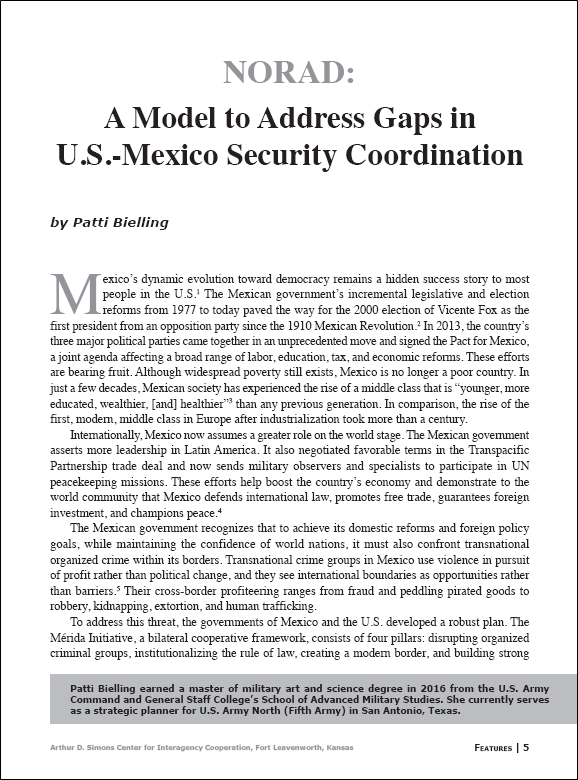 Mexico’s dynamic evolution toward democracy remains a hidden success story to most people in the U.S. The Mexican government’s incremental legislative and election reforms from 1977 to today paved the way for the 2000 election of Vicente Fox as the first president from an opposition party since the 1910 Mexican Revolution. In 2013, the country’s three major political parties came together in an unprecedented move and signed the Pact for Mexico, a joint agenda affecting a broad range of labor, education, tax, and economic reforms. These efforts are bearing fruit. Although widespread poverty still exists, Mexico is no longer a poor country. In just a few decades, Mexican society has experienced the rise of a middle class that is “younger, more educated, wealthier, [and] healthier” than any previous generation. In comparison, the rise of the first, modern, middle class in Europe after industrialization took more than a century.

The Mexican government recognizes that to achieve its domestic reforms and foreign policy goals, while maintaining the confidence of world nations, it must also confront transnational organized crime within its borders. Transnational crime groups in Mexico use violence in pursuit of profit rather than political change, and they see international boundaries as opportunities rather than barriers…