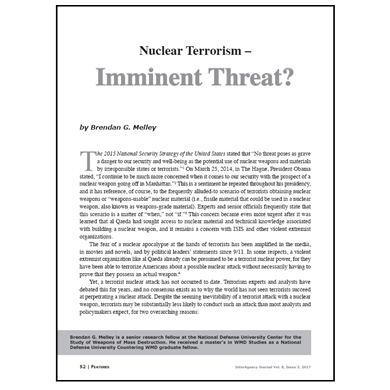 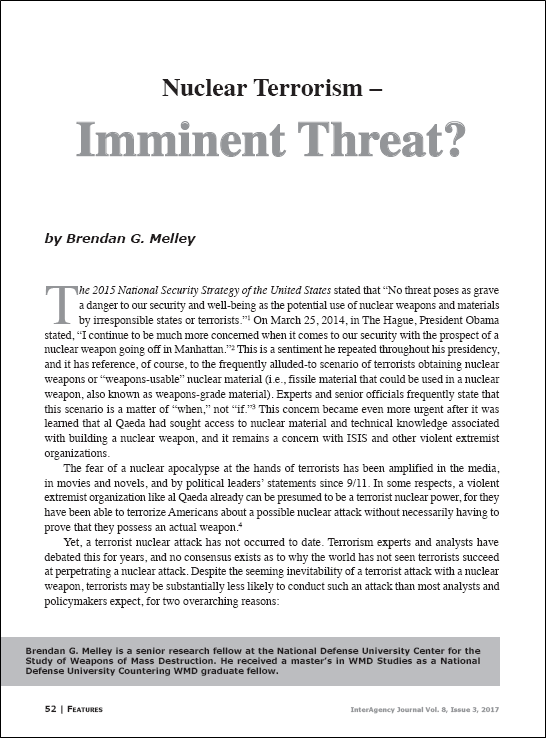 The 2015 National Security Strategy of the United States stated that “No threat poses as grave a danger to our security and well-being as the potential use of nuclear weapons and materials by irresponsible states or terrorists.” On March 25, 2014, in The Hague, President Obama stated, “I continue to be much more concerned when it comes to our security with the prospect of a nuclear weapon going off in Manhattan.” This is a sentiment he repeated throughout his presidency, and it has reference, of course, to the frequently alluded-to scenario of terrorists obtaining nuclear weapons or “weapons-usable” nuclear material (i.e., fissile material that could be used in a nuclear weapon, also known as weapons-grade material). Experts and senior officials frequently state that this scenario is a matter of “when,” not “if.” This concern became even more urgent after it was learned that al Qaeda had sought access to nuclear material and technical knowledge associated with building a nuclear weapon, and it remains a concern with ISIS and other violent extremist organizations.

The fear of a nuclear apocalypse at the hands of terrorists has been amplified in the media, in movies and novels, and by political leaders’ statements since 9/11. In some respects, a violent extremist organization like al Qaeda already can be presumed to be a terrorist nuclear power, for they have been able to terrorize Americans about a possible nuclear attack without necessarily having to prove that they possess an actual weapon.

Yet, a terrorist nuclear attack has not occurred to date. Terrorism experts and analysts have debated this for years, and no consensus exists as to why the world has not seen terrorists succeed at perpetrating a nuclear attack. Despite the seeming inevitability of a terrorist attack with a nuclear weapon, terrorists may be substantially less likely to conduct such an attack than most analysts and policymakers expect…