Featured Article: A Comparative Analysis of the Effectiveness of Operations in Mali and Somalia 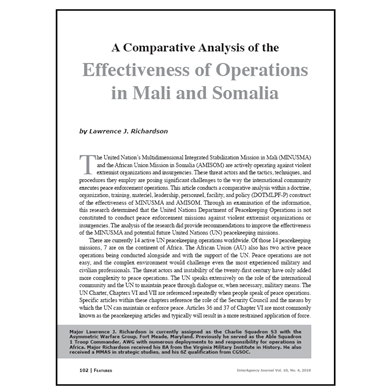 A Comparative Analysis of the Effectiveness of Operations in Mali and Somalia
by Lawrence J. Richardson 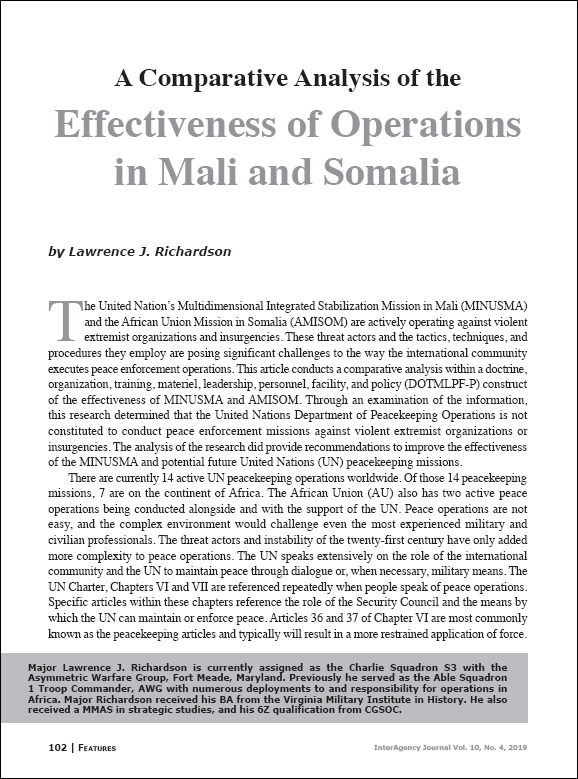 The theory of a joint interagency task force (JIATF) operating in a predatory state or disparaging regime is perhaps the largest practical and contemporary challenge that military and interagency officers face in the field today. Utilizing the doctrinal terms and globalization theories studied thus far, this article attempts to examine the theory of a “predatory state” and apply it to the real-world case study of the Joint Special Operations Task Force–Philippines (JSOTF-P) operating from 2012 to 2015 under a corrupt regime. Trying to conduct humanitarian aid, counterterrorism, and foreign internal defense (FID) missions in a region affected by a predatory regime is extremely difficult. The political policies and international relations between the U.S. and the Philippines were affected by the tactical actions of troops on the ground. JSOTF-P’s actions were critical to maintaining a military partnership in order to fight Islamic extremists in the region,
but the question remains, does a JIATF have the capability and capacity to succeed while operating under a predatory state?

The term “predatory state” or a “predatory regime” refers to the social model in which a host nation’s governmental apparatus takes advantage of the economic resources and social influence of the people in order to give them a marked advantage, at the expense of the populace…