Featured Article: Out of Sync… 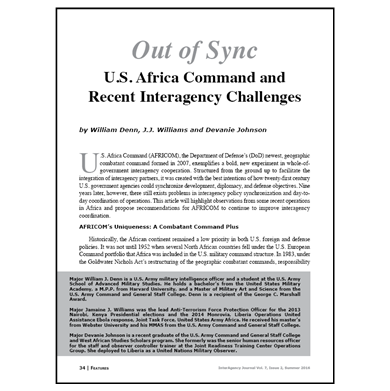 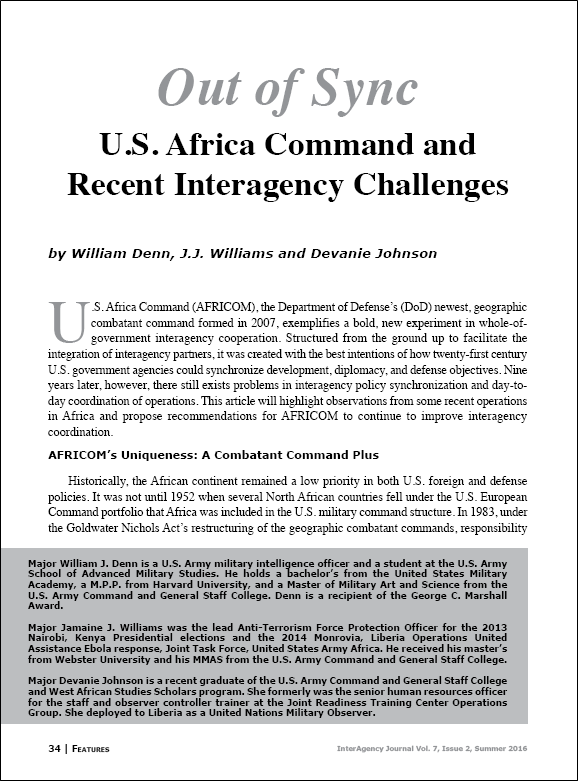 U.S. Africa Command (AFRICOM), the Department of Defense’s (DoD) newest, geographic combatant command formed in 2007, exemplifies a bold, new experiment in whole-of-government interagency cooperation. Structured from the ground up to facilitate the integration of interagency partners, it was created with the best intentions of how twenty-first century U.S. government agencies could synchronize development, diplomacy, and defense objectives. Nine years later, however, there still exists problems in interagency policy synchronization and day-today coordination of operations. This article will highlight observations from some recent operations in Africa and propose recommendations for AFRICOM to continue to improve interagency coordination.

Historically, the African continent remained a low priority in both U.S. foreign and defense policies. It was not until 1952 when several North African countries fell under the U.S. European Command portfolio that Africa was included in the U.S. military command structure. In 1983, under the Goldwater Nichols Act’s restructuring of the geographic combatant commands, responsibility for Africa was divided among three different combatant commands: U.S. European Command (EUCOM), U.S. Central Command (CENTCOM), and U.S. Pacific Command (PACOM).

It was not until post-September 11, 2001, however, that Africa grew in strategic importance to U.S. national security interests…