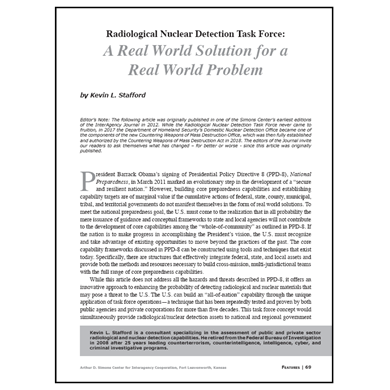 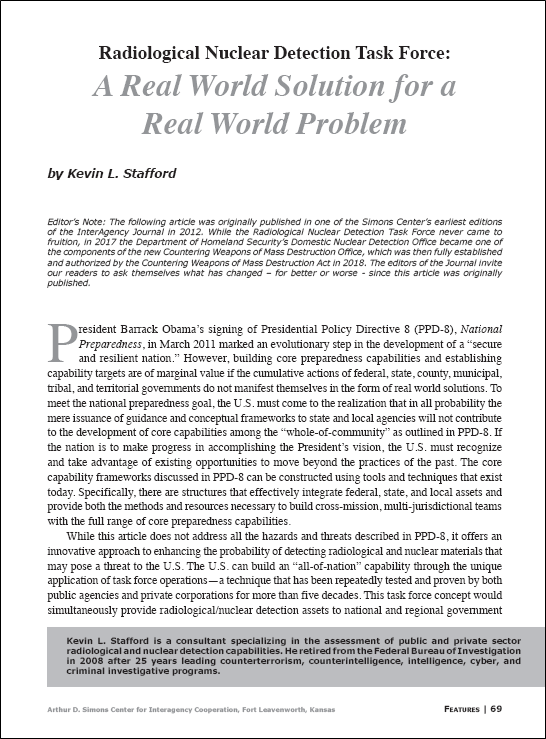 President Barrack Obama’s signing of Presidential Policy Directive 8 (PPD-8), National Preparedness, in March 2011 marked an evolutionary step in the development of a “secure and resilient nation.” However, building core preparedness capabilities and establishing capability targets are of marginal value if the cumulative actions of federal, state, county, municipal, tribal, and territorial governments do not manifest themselves in the form of real world solutions. To meet the national preparedness goal, the U.S. must come to the realization that in all probability the mere issuance of guidance and conceptual frameworks to state and local agencies will not contribute to the development of core capabilities among the “whole-of-community” as outlined in PPD-8. If the nation is to make progress in accomplishing the President’s vision, the U.S. must recognize and take advantage of existing opportunities to move beyond the practices of the past. The core capability frameworks discussed in PPD-8 can be constructed using tools and techniques that exist today. Specifically, there are structures that effectively integrate federal, state, and local assets and provide both the methods and resources necessary to build cross-mission, multi-jurisdictional teams with the full range of core preparedness capabilities.

While this article does not address all the hazards and threats described in PPD-8, it offers an innovative approach to enhancing the probability of detecting radiological and nuclear materials that may pose a threat to the U.S. The U.S. can build an “all-of-nation” capability through the unique application of task force operations—a technique that has been repeatedly tested and proven by both public agencies and private corporations for more than five decades…

Editor’s Note: The following article was originally published in one of the Simons Center’s earliest editions of the InterAgency Journal in 2012. While the Radiological Nuclear Detection Task Force never came to fruition, in 2017 the Department of Homeland Security’s Domestic Nuclear Detection Office became one of the components of the new Countering Weapons of Mass Destruction Office, which was then fully established and authorized by the Countering Weapons of Mass Destruction Act in 2018. The editors of the Journal invite our readers to ask themselves what has changed – for better or worse – since this article was originally published.