Featured Article: A Novel Approach to Reducing Violence and Poverty in El Salvador 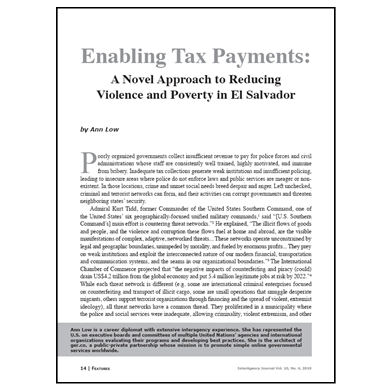 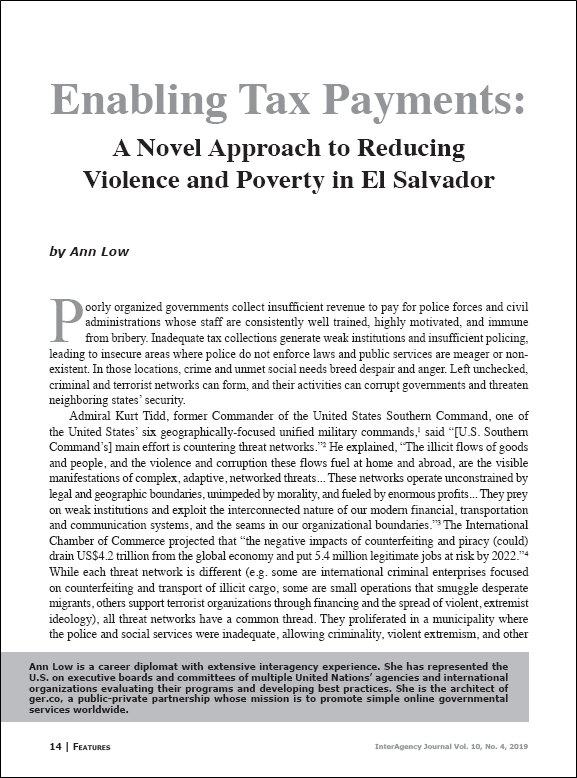 Poorly organized governments collect insufficient revenue to pay for police forces and civil
administrations whose staff are consistently well trained, highly motivated, and immune from bribery. Inadequate tax collections generate weak institutions and insufficient policing, leading to insecure areas where police do not enforce laws and public services are meager or nonexistent. In those locations, crime and unmet social needs breed despair and anger. Left unchecked, criminal and terrorist networks can form, and their activities can corrupt governments and threaten neighboring states’ security.

Admiral Kurt Tidd, former Commander of the United States Southern Command, one of
the United States’ six geographically-focused unified military commands, said “[U.S. Southern Command’s] main effort is countering threat networks.” He explained, “The illicit flows of goods and people, and the violence and corruption these flows fuel at home and abroad, are the visible manifestations of complex, adaptive, networked threats… These networks operate unconstrained by legal and geographic boundaries, unimpeded by morality, and fueled by enormous profits… They prey on weak institutions and exploit the interconnected nature of our modern financial, transportation and communication systems, and the seams in our organizational boundaries.” The International
Chamber of Commerce projected that “the negative impacts of counterfeiting and piracy (could) drain US$4.2 trillion from the global economy and put 5.4 million legitimate jobs at risk by 2022.” While each threat network is different (e.g. some are international criminal enterprises focused on counterfeiting and transport of illicit cargo, some are small operations that smuggle desperate migrants, others support terrorist organizations through financing and the spread of violent, extremist
ideology), all threat networks have a common thread. They proliferated in a municipality where the police and social services were inadequate…