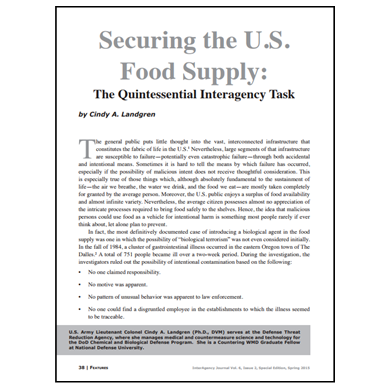 Securing the U.S. Food Supply: The Quintessential Interagency Task
by Cindy A. Landgren 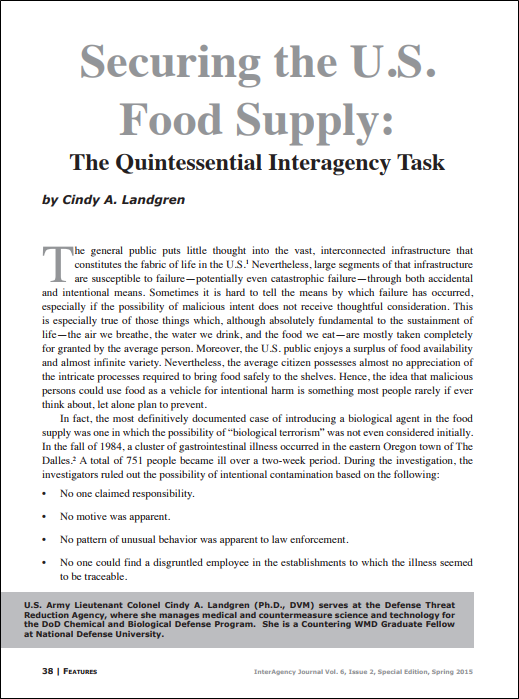 The general public puts little thought into the vast, interconnected infrastructure that constitutes the fabric of life in the U.S. Nevertheless, large segments of that infrastructure are susceptible to failure—potentially even catastrophic failure—through both accidental and intentional means. Sometimes it is hard to tell the means by which failure has occurred, especially if the possibility of malicious intent does not receive thoughtful consideration. This is especially true of those things which, although absolutely fundamental to the sustainment of life—the air we breathe, the water we drink, and the food we eat—are mostly taken completely for granted by the average person. Moreover, the U.S. public enjoys a surplus of food availability and almost infinite variety. Nevertheless, the average citizen possesses almost no appreciation of the intricate processes required to bring food safely to the shelves. Hence, the idea that malicious persons could use food as a vehicle for intentional harm is something most people rarely if ever think about, let alone plan to prevent.

In fact, the most definitively documented case of introducing a biological agent in the food supply was one in which the possibility of “biological terrorism” was not even considered initially. In the fall of 1984, a cluster of gastrointestinal illness occurred in the eastern Oregon town of The Dalles. A total of 751 people became ill over a two-week period. During the investigation, the investigators ruled out the possibility of intentional contamination based on the following: