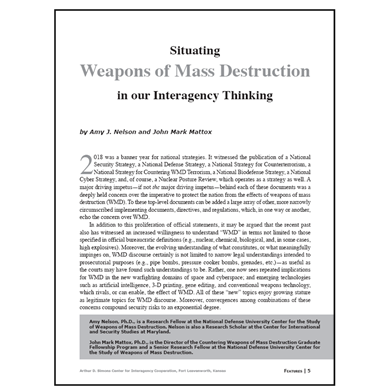 In addition to this proliferation of official statements, it may be argued that the recent past also has witnessed an increased willingness to understand “WMD” in terms not limited to those specified in official bureaucratic definitions (e.g., nuclear, chemical, biological, and, in some cases, high explosives). Moreover, the evolving understanding of what constitutes, or what meaningfully impinges on, WMD discourse certainly is not limited to narrow legal understandings intended to prosecutorial purposes (e.g., pipe bombs, pressure cooker bombs, grenades, etc.)—as useful as the courts may have found such understandings to be. Rather, one now sees repeated implications for WMD in the new warfighting domains of space and cyberspace; and emerging technologies such as artificial intelligence, 3-D printing, gene editing, and conventional weapons technology, which rivals, or can enable, the effect of WMD. All of these “new” topics enjoy growing stature as legitimate topics for WMD discourse. Moreover, convergences among combinations of these concerns compound security risks to an exponential degree….

Situating Weapons of Mass Destruction in our Interagency Thinking PDF